Commentary
Haslar turned out to be something of a perfect first stop thanks to an impromptu yarn-swapping dinner par excellence onboard the Princess V39 Play D’Eau owned by Piers du Pre. After that a real wake-up call was required in the morning but the marina’s distinctive green lightship Mary Mouse plays host to some excellent facilities for showering, so all was well. Even the tide and ship induced swell which can invade one’s sense of well being at Haslar was for the most part absent.

It is something of a surprise to find ourselves in Haslar’s sister marina at Weymouth tonight. Given the weather forecast, we thought it likely that Yarmouth on the Isle of Wight would beckon but a gloriously bright morning enticed us out of the Solent. 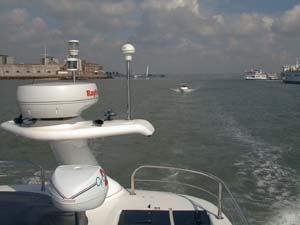 A requirement to drop some test gear in Lymington and then to escort the smallest boat in our Cruising Club fleet into the calmer waters of Poole Harbour saw us take the long route. Consequently we started to pick up on the afternoon’s stronger winds that resolutely failed to shift northwards from SW as the tide turned. Missing Link got dowsed in her first serious salt spray of the season, although being safely ensconced at the lower helm station, it didn’t matter much to her crew. We did however vow to fit a freshwater windscreen wash system, if time ever allows.

Our 30 knot Sealine F36 is capable of sitting quite happily at 14-16 knots, given a bucketload of trim tab. It’s a good way of riding out the short and sharp waves that are so often a feature of English Channel cruising. The longer swells of the Atlantic beckon Missing Link westwards.

Alex had his first real chance today to get to grips with the bench full of chart plotters we have on test. No names, no pack drill at this stage for we aren’t quite sure who or what to blame yet, but we’ve already had failures on two out of five. We’re feeding the quintet, plus a laptop PC, from one GPS via an NMEA 0183 amplifier so the cabling alone is quite impressive.

We are already in need of some serious amounts of extra time to check and recheck everything on the test bench; it is also very difficult for Alex to get to grips with the electronic cartography and software protocols that differ quite significantly from unit to unit.

By rights we should be looking to break for Torbay in order to stay with our Grand Tour schedule, especially as we would also like to respond to an invitation to visit Topsham on the River Exe. But the Cruising Club fleet may well have to turn tail tomorrow for Poole in the face of a developing weather depression. Chances are we will temporarily retrace our steps and go with them there tomorrow.

Tuesday and Wednesday 20-21 April are the dates we have set aside to photograph the plotters, so Missing Link will become a studio for those days in addition to her growing number of other roles. If the wind really gets up, Poole will give us the shelter needed to get the job done. It also has plenty of things to colour the charts, such as buoys, islands and a mix of deep and shallow water.