Navigation log
Fuel on 25/4/99: 440lt at a cost of ??110.00. Also replace a Calor Gas cylinder ??8.35.
1645: underway.
1750: Ease Exe cardinal. Increase speed to 24 knots. Wind light NE. Sea a bit confused from F7 blow yesterday. Eyeball nav, point bow towards Berry Head and set autopilot on 205M.
1815: 1.5nm off Hope’s Nose.
1828: 0.25nm off Berry Head.
1830: Off Mudstone Ledge. Mild thump forward, then prop vibration. Drop speed immediately and investigate. Appear to have wrapped a waterlogged seagull around port prop. Some parts emerge, but there is still a vibration so set speed at 2300rpm/9 knots on starboard and kill port engine. Inspect inside of lazarette and engine room but no leaks or signs of damage.
1855: East of East Blackstone.
1910: Castle Ledge stbd mark off Dartmouth.
1915: Dartmouth Castle, drop speed to 6 knots, start port engine and try. Feels as if vibration has gone. Turn out to sea again.
1920: brief run at speeds of 20-29 knots; no obvious vibration. Turn back to Dartmouth Castle and drop to 6 knots again.
1930: alongside Darthaven Marina on gangway between pontoons C and D. 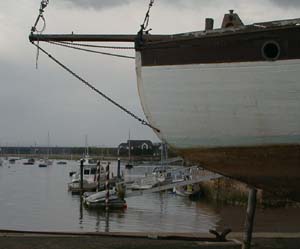 Lynn Trout had promised us that Topsham was as good a place as any to get storm bound. We now have no struggle in agreeing.

After the frantic activity of the past week, it seemed like heaven strolling along pretty streets so quiet that you might have thought you had gained the sanctuary of a church. Couple that with the friendly greetings of local boatowners and traders and it is somewhat of a surprise to find that we ever got around to casting the lines off again.

W Trout & (five generations of) Sons is itself a fascinating place. 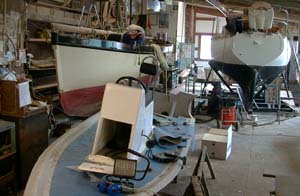 After the modern marinas of the past few days we suddenly found ourselves in a yard which quite happily encompasses boats of all ages. A beautiful 19th Century Itchen Ferry was the first thing to catch our eye; soon afterwards we were in the shed and taking in the rather incongruous sight of two long-keeled classics, a traditional GRP-hulled launch and the skeleton of a modern RIB undergoing full restoration.

With high water approaching we had to let Mike and Mark Trout commence the afternoon’s task of launching boats while we headed off to meander down the Exe. Given that we had a little more knowledge and a little more tide, the experience down was an even better one than on the way up. Sunshine played on the attractive towns and hamlets along the way as we zig-zagged between buoys towards to sea.

Heading over the bar, it seemed there was a little bit of slop left over from the day before, but not much. So once clear of the channel and its 10 knot speed limit we pointed Missing Link‘s bow towards Berry Head, popped her up to 24 knots, set the autopilot and sat back to enjoy the ride for the next 40 minutes.

Brixham Coastguard had been giving F7 readings from Berry Head the day before, so we were grateful that there was only a slight wave pattern dancing around the bases of Cod Rock and its attendant codling closer inshore. Two minutes later our reverie was forgotten though as first a slight thump forward, then a prop vibration, moved us to shut the throttles with haste.

Not keen on worsening any damage, we tentatively put first one engine, then the other, in gear. As the port prop started to spin, the West Country’s crystal clear waters were speckled with lots of feathers and the remains of what had once been a seagull. We’re convinced it was long dead and waterlogged when we encountered it, as nothing had been seen forward where we had been keeping a keen eye open for fishing markers.

Running up the port engine very gently, the vibration was still there. So, as a precaution against doing any damage to the shaft and bearings, we closed the engine down entirely. Missing Link is fitted with Spurs Cutters but we have a natural aversion to throwing a boat into ahead and astern in an effort to clear an obstruction of unknown origin. Our fear was that the seagull might have been entangled with net.

At least our 9 knot cruise on the starboard engine gave us time to view the East Blackstone rock and the greater bulk and serrated profile of the Mew Stone before heading up the River Dart.

I had been reluctantly contemplating a dip in a dry suit to assess the damage before dinner. But once inside Dartmouth Castle we speculatively tried the port engine to see if the obstruction might have dropped off as the shaft appeared to be windmilling okay when we checked the engineroom. Initial low speed trials seemed to indicate whatever had been causing the vibration was gone, so Missing Link‘s bow was pointed once again to sea for a brief run at higher speeds. All seemed fine, although we will take an early opportunity to have a look, just to make sure nothing is damaged or entangled.

The feeling of relief that we were running again, coupled by the stunning vista of Dartmouth to port and Kingswear to starboard, made a perfect end to a rather interesting mini passage.

Our chosen marina was Darthaven, partly to make it easy for Brixham-based MBM contributor Loris Goring to join the crew as our local knowledge for the week, partly to meet up with a Fairline Turbo 36 which has been re-engined with 350hp Yanmar diesels.

A fish supper in the Royal Dart rounded off the evening nicely, save for the fact that I nearly fell face forward into a plate of scallops (the Topsham change of pace has caught up on me). The forecast doesn’t look that good again, but we plan to spend some time tomorrow (Tuesday 27 April) working with the Fairline ready for a Test of Time feature in the magazine later in the year. Then we’ll probably saunter up the Dart with the tide for a brief look at Totnes before overnighting again at Darthaven.