Commentary
We last saw Rupert Moore as he was heading off from the 1996 MBM Paris Cruise in Company from Le Havre bound for the West Country. Sunkarla was then a Princess 35, now in MkII guise she is a Sealine 420. Rupert and his wife Brenda had made contact a few days ago suggesting a visit to their home port of Sutton Harbour in Plymouth and we needed no further bidding.

This former tidal basin is the original heart of maritime Plymouth and the signs are all around. You can spend several minutes just reading the plaques up on the crosswall to the 24hr lock which now keeps boats afloat at all states of the tide:

“This tablet commemorates the departure from Plymouth in May 1839 of the ‘Tory’, the pioneer ship in the colonisation of New Zealand.”

“This tablet was erected by the Plymouth Borough Council to commemorate the arrival on the 31st day of May 1919 of the American seaplane NC4 in Plymouth Sound on the completion of the first transatlantic flight.

And perhaps most telling of all:

“On the 6th of September 1620, in the Mayoralty of Thomas Townes, after being “kindly entertained and courteously used by divers friends there dwelling”, the Pilgrim Fathers sailed from Plymouth in the Mayflower, in the Providence of God to settle in New Plymouth, and to lay the foundation of the New England States…”

While I was getting plaque happy, MBM’s very own Pilgrim Father Loris Goring was on a different voyage of discovery, seeking the home of Plymouth Gin just a short stroll through the Barbican’s enticing streets. With typical tenacity he researched the subject thoroughly, apparently. He also popped into the new National Marine Aquarium building although, as with much of our Grand Tour adventure, there wasn’t nearly enough time to do the place justice. 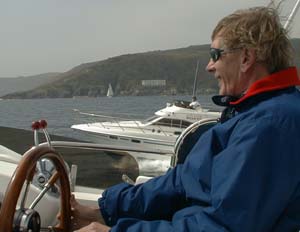 Our schedule for the afternoon was to leap into Cornwall with Sunkarla II for company. Jake jumped ship to take photographs of Missing Link and seemed more than happy to exchange our Sealine for a bigger one. But the enthusiasm Loris had displayed for the West Country’s coast and rivers seemed to vanish the minute we crossed over the border from his home county of Devon. In the damp mist and 3nm visibility out at sea, it seemed that he might have a point. That was until we got to Fowey, a short run up a river with easy access and no bar. 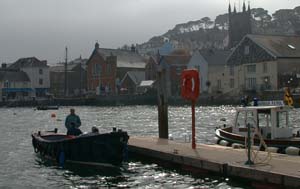 Our early season mid-week arrival served us well, for we were allowed to lie on the town pontoon for the whole of our two-hours of liberty. Most visitors will wind up taking mid-river moorings and using a tender or the water taxi service to get ashore. But the effort will be well rewarded.

As you step ashore towards an intimate waterfront of buildings backed right up to sea you find a little gem of narrow streets and traditional stores. We arrived late, as usual, then indulged in tea and cake before taking a stroll ashore, so it was only by seconds that we caught the local butcher who sold us some of the best fresh chicken we have ever tasted. We were unluckier with the fishmonger who had already cleared shop by the time we got around to realising we had walked past his window. When you work in London, you lose track of the fact that some folk in Britain still manage to organise their lives in a much more civilised way.

One shop owner told us that Fowey is relatively unknown by typical Cornwall tourists, but once someone makes the discovery they keep coming back. We can see why; we’ll certainly wind up proving her theory. But for now our task was to reduce the town population by three, leaving the good crew of Sunkarla II to stay behind for the night while we tackled the mist again, this time to make for Falmouth.

Rock-hopping was out of the question as we swung out wide to avoid the Gwineas, the overfalls off Dodman Point and Gull Rock and its attendant rash of smaller compatriots termed The Whelps. Finally closing the land down off Porthmellin Head we saw the sectored light of St Anthony Head loom into view, and then the large beacon on Black Rock which stands guard at the entrance to the mighty River Fal and its dominant commercial docks to port.

Given the evening air, which was getting colder and damper by the minute, we weren’t in much of a mind to do anything other than head for our berth at Falmouth Yacht Marina about a mile and a half from town up the Penryn River. Our exploration of the area could wait until the morning.