We’ve enjoyed a very pleasant weekend here at Upton on the River Severn meeting up with local boatowners and also with some familiar faces who live locally but keep their craft on the South Coast.

Despite indifferent weather, the marina has been very active, with a steady procession of smartly presented cruisers big and small making their way to or from the river through the arched bridge at the entrance. Our berth on the end of C pontoon gives us an ideal vantage point both to spot the comings and goings and to watch a heron who spends much of his day watching us, it seems. Clearly we are close to his patch.

Today provided an opportunity to write the first of the Grand Tour articles for the magazine. It’s a monster (and that is after making substantial cuts) but we are not surprised. Our progress so far has given us more than we could ever hope to find and report (published in Motor Boats Monthly’s July 1999 edition). 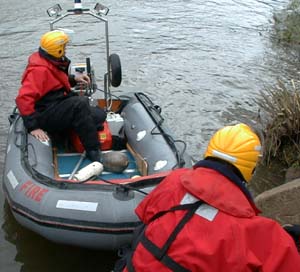 Took a break from writing to gate-crash the launch of the Upton fire boat, a fully-equipped Avon 3.40 inflatable mainly aimed at river rescue duties which has been fully funded by the efforts and donations of the local people here. When you see the long list of activities and achievements that this town generates, you would take it for being an altogether bigger place.

The fire station itself is manned by ‘retained’ fire fighters, part time personnel who have a full time job to attend to in addition to their duties. Judging from our half-hour with them in the Swan pub, a lovely old place with the names of visiting boats chalked on the ceiling beams, they’re a great bunch of people, as one might suspect. We particularly warmed to Wayne who, amongst other interests, is responsible for putting together many of the local firework displays. Poacher and gamekeeper perhaps?

The rain played tricks today. First it drowned myself and Upton Marina manager Steve Arbor as we were walking back from the fireboat launch. A bit later some rays of light started to gleam through the saloon windows, so I decided to walk along the pontoon to take photographs of the moorings. God and his everlasting bucket waited just long enough to be in drenching distance from Missing Link before turning on the tap, still in perfect sunshine. Second set of clothes on the aft cockpit line.

I’m a bit worried that, if this keeps up, the river level will rise. On a spring tide and with the Avon, (just a few miles downstream of us) in flood, the Severn has been known to run backwards and rise 2m in an hour, although there’s no sign of that yet.