Commentary
Howard turned up this morning to join Missing Link again for the downhill leg. He is a constant bluster of enthusiastic organisation, a one-man dynamo who does his work on behalf of Severn and Gloucester-Sharpness Canal leisure users without any hint of a personal agenda. They are lucky to have his boundless energy and time, and so am I (even if he can’t make a proper cup of tea).

It was with regret that we turned Missing Link‘s bow out of Upton Marina. Manager Steve Arbor had said that our berth, one of just a few unoccupied ones in the peaceful lagoon, was going spare until June; we could have stayed there to keep it warm for the next occupant. But time and tide wait for no man…

Mind you, that is a silly saying for it takes no account of weather. We don’t have such a luxury. The rain was dealt with easily enough by leaving the flybridge tonneau up and steering from the lower helm. You’ll not be surprised that the sun came out in response, for bits of the day at least. But a similar solution to spook away the wind has yet to be added to Missing Link‘s inventory. As we headed downstream it wasn’t a great encouragement to still feel the influence of a stubborn low when plans call for us to head for sea tomorrow.

First call of the day was at Tewkesbury, where Howard had promised us a meeting with one of the Severn’s last skippers of cargo-carrying barges. There were a few surprises in store though.

We hadn’t exactly expected Jim Dorman to arrive in a Rolls Royce limousine. We hadn’t expected him to hail from the East End of London. And we hadn’t expected to run out of notepaper trying to keep up with the many jobs he has conquered over the years.

Steel boatbuilding was the enterprise that eventually drew Jim to the Severn area. Once there, he started building down as well as up, digging a big hole in the ground which became known as Evesham Marina and filling it with a hireboat fleet that peaked at 65 craft in its heyday.

Jim’s latter day roots are still in Evesham and he remains keenly interested in the leisure boating scene. But you are now as likely to find him delivering a flat-bottomed Dutch barge around Lands End or at the helm of one of the two 40m (130ft) grain carrying barges Tirley and Chaceley which ply between Sharpness and Healings Mill at Tewkesbury when cargoes are available.

Weighing 150tonnes empty, 400 tonnes full and propelled by a single 150hp Gardner diesel, these barges take a bit of stopping, so the G-S Canal’s swingbridges and pleasure craft both have to be anticipated well in advance although ultimately Tirley and Chaceley need a measure of co-operation from both.

The silted Upper Parting above Gloucester also causes problems. When Jim first started working the barges it often took him over three hours to cover three miles there. Once, his ship touched bottom, skewed across and neatly planted the bow on one bank and the stern on the other, which took a bit of sorting out especially when a narrowboat appeared around the corner and had nowhere left to go.

Comfortably lounging in the corner of our “Tupperware boat”, Jim was at pains to point out he never likes to run the barges faster than 5 knots. “We only burn about a third of the diesel, don’t make wash and get there just as quickly.” He also loads them slightly bow down, which makes for slightly livelier handling but ensures they run at a level 1.8m (6ft) draft on the canal and river, rather than dragging stern down.

Jim worries, not without reason, that working boat skills on the Severn are being lost forever. However, perhaps he has proven in some way that it is possible for people to carry on a proud heritage on a waterway that begs to be used.

After an easy hour, our ways parted again, the Rolls pointing northwards, the Sealine heading south. 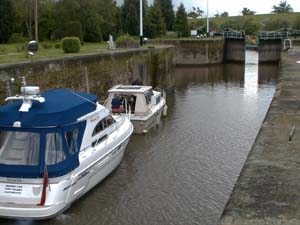 Within minutes we were in Upper Lode lock, still trying to fathom out its bowl-shaped chamber at the one end. The latest theory we have heard is that it was originally designed to allow commercial craft to raft across and shelter out of the tide at night.

Once through we settled down to the straightforward run to Gloucester, giving the Yew Tree Inn a hailing parp along the way (they seem to like blowing the ship’s horn a lot in these parts). We loitered to look at the new signs erected as a result of the User Group’s request which make finding and approaching Gloucester Lock an easier task. Then, rounding the final bend we came upon our last hurdle for the day.

Approaching the chamber from upstream requires deftness on the wheel and engines, as the current sweeps you towards it, then teases away to starboard just at point of entry. Missing Link took it all in her stride, although we allowed her to rest with her fenders on the gate whilst her air draught was checked against the road bridge which runs over the upstream part of the lock. We had crept under last week, but water levels were up and we needed the bridge to lift fractionally before we could enter this time around.

Once in the basin and lying alongside Kimberley Warehouse, we met up with Trevor Hill, a champion of disabled boating on the G-S Canal, who welcomed us aboard his purpose-built Cygnus Cleo. Amongst his many credits Trevor pushed through and funded the building of a dedicated mooring at Purton a few years back. This is used by the Willow Trust who run two 70 tonne wide beam steel barges specially adapted to give physically and mentally disadvantaged people free day trips on the canal.

Cleo‘s aft cabin settee was very comfortable and the chat about his many years at the BBC fascinating, but social secretary Howard was beckoning it was time to move on.

We last visited the Gloucester Yacht Club when Motor Boats Monthly helped to organise a round Britain charity boat relay for children suffering from Leukaemia in 1995. Our impressions were of a welcoming place, small, intimate and without any pretensions. Our only regret was that we had called by car, so for us the honour of chalking a boat name on the joists could not be granted. 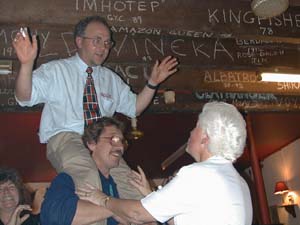 This time around the welcome (on an evening specially laid on for us) was just as warm, but I was allowed to climb on the suffering shoulders of Gary Workman to inscribe Missing Link‘s name on the hallowed timbers. Commodore Lynne Starkey and another great Severn character, Vice Commodore Les Rae, presented Missing Link with a GYC burgee. We will wear it with pride tomorrow and carry it around with us on the rest of our Grand Tour.

There would be a lot of fun in carrying on here to relate the anecdotes and events of a memorable evening, but there are some things better left as secrets to be kept amongst friends. Suffice to say if you visit, do go armed with at least a ??1 coin in addition to your bar money and ask what the long line of initials on the wall represents.