Commentary
Howard had checked and rechecked his figures; he had also spoken with Sharpness Docks, Avonmouth Signal Station and City Docks Bristol. With Missing Link‘s potential speed and with a lot of helpful co-operation from these authorities, it should be possible to run from Sharpness to Bristol in one tide, the first time he would ever have managed the feat in 180 or so passages along the Severn Estuary.

Given a forecast that didn’t look too lively and the fact that wind would be with tide, I agreed with the idea, but vowed to divert to Penarth if it looked as though we were going to lose high water at Bristol.

But before the drama of our unusual attempt unfolded we had to gently amble down the Gloucester-Sharpness Canal, our Gloucester Yacht Club pennant fluttering proudly in a busy breeze.

One immediate mystery was the log, which was only registering about half of our speed. Drawing the transducer out of its fortunately self-sealing housing (a real luxury), I was rather astonished to discover the paddlewheel clear of fouling and missing a blade. Somehow it must have been damaged on the river shortly before entering Gloucester Lock the day before. A few calls later a replacement part had been ordered from Raytheon for delivery to the harbourmaster’s office at Bristol.

All was then peaceful with only a pair of silly swans for entertainment. As Missing Link approached they took off like heavily laden flying boats, only to land a few hundred metres ahead and then repeat the process all over again.

Our reverie was disturbed though by a broadcast on VHF Ch74 stating that the canal was temporarily closed due to a diver working on a bridge. The loudspeaker crackled just as we spotted the waving of arms from a moored boat while we were drawing abreast of it. For one moment panic reigned on Missing Link as we frantically searched for a diver much nearer to us than expected. Seconds later, skewed across the waterway thanks to an emergency stop on the one engine we had been using, we realised the two events were unconnected.

Ken Round and Karen Lloyd were in fact hailing us to pay a visit to their 36ft Pembroke-built steel cruiser Knot-Tide. We hadn’t recognised them at first, given their current boat, but then the penny dropped.

Karen had been commended in Motor Boats Monthly’s Waypoint 95 cruising log awards for her account of taking their previous cruiser, a Neptune 31 trawler yacht called Rio Grande, from the Severn Estuary to Mousehole in Cornwall via many of the drying harbours of the Bristol Channel.

The Neptune had been equipped with legs to make drying out a sensible proposition but their latest acquisition, built like a brick outhouse with machinery to match, has bilge keels so that the intrepid couple can carry on using havens in which other motor cruisers fear to tread.

That said, Ken and Karen have bigger ambitions again. We had caught them in the very first stage of a run down through the French canals to the Med and then on to who knows where. “When will you be back”, we asked, only to be greeted by a shrug of the shoulders which said it all.

After that, there were no further interludes until we reached Sharpness, the canal having now conveniently re-opened again. A brief spell lying alongside Sea Mist in Sharpness Marina allowed Howard to collect his sea-going togs while Kim checked Missing Link‘s engines. 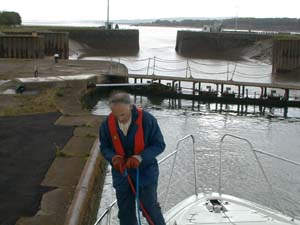 Then it was time to cast off again to make our booked bridge opening, holding briefly in the stark but thankfully still busy surroundings of the dock before entering Sharpness Lock. Looking across and into the waters of the tidal basin many feet below us was as obvious a sign of the Severn’s great tides as we have seen so far on this trip.

Taking the elevator to the basement we were amused to see freshwater mussels squirt water in their annoyance at being uncovered. Then Howard quickly pointed out an elver squirming its way down to a hidey-hole. Quite how, or why, such a tiny creature should swim all the way from the Caribbean only to wind up an object of our interest on a muddy lock wall somewhere in England has been the subject of some speculation on Missing Link.

With gates open, fenders retrieved and photographs quickly taken of a new holding pontoon in the tidal basin, we had no choice but go, go, go (Murray Walker eat your heart out).

Quickly up on the plane at 28 knots and swinging round onto the first transit, Missing Link‘s crew had to acknowledge that they were having the time of their lives. Howard called the courses, monitored the transits and watched the depth while I kept an eye out for flotsam and the odd rogue wave. Our turning points whizzed by and we soon found ourselves flying down the sheltered side of the estuary along Slime Road.

Once past the Severn Bridge, the waters became a bit lumpier and so we conceded three knots for the comfort of ship and crew. It was almost disorienting, having around six knots of tide against a boat making 25 knots whilst working through the very stationary magnificence of the suspended motorway above. What were the ordinary mortals above thinking about, zipping past at 60mph: a late business appointment perhaps? Whether they had the right change for the toll? What was for dinner tonight? They should have been on the water with us; now that was living!

Not many minutes later, we were slowing to enter Bristol’s version of the River Avon, receiving a friendly wave from Roger at the Signal Station. There was no way we were going to break any speed limits, or throw any unnecessary wash in the wrong places, so it was down to 9 knots at first and then 6 knots as we passed Pill.

Fortunately time seemed to be on our side so we could appreciate the growing scenery as the Avon’s rocky valley gorged us up. Passing Black Rock, where an excavator-sized storm drain expels its contents, we saw the interesting phenomena its rain-propelled discharge hitting the first of the ebb tide. 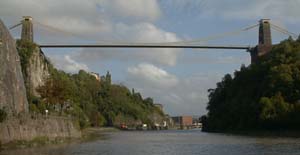 Then Clifton Suspension Bridge added to our trawl of Brunel wonders before we got ready for the greeting of Captain Bill Folley, late of the Condor fast catamaran service out of Weymouth, now enjoying the benefits of getting home every day courtesy of his Dockmaster’s office.

Having arrived close to high water the lock had little to do before popping us into Cumberland Basin and then, via the swinging Junction Bridge, into Bristol’s fascinating Floating Harbour. We had originally planned to tie up straight away but first-time visitor I was entranced by the sight of vessels of all types and colourful shoreside properties ancient and modern and wanted to see what was around the corner in the snaking, 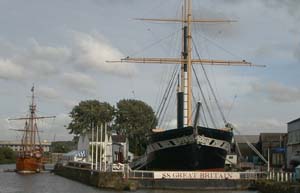 elongated basin. It was another entry for the Brunel log when we saw the SS Great Britain restored and snug in her dry dock. Lying close by was a replica of a pioneering ship from earlier days, the Matthew. The 1990s version is no less adventurous, having completed two transatlantic voyages now.

Finally we returned to Baltic Wharf, dodged through the colourful sails and playful shrieks of dinghies laden with kids under instructions and put Missing Link to bed for the night. Following a courtesy visit from harbourmaster Geoff Lane, one of the sailing instructors responsible for the junior regatta, we were left to reflect on the day’s achievements.

To the best of Howard’s knowledge only one boat has achieved a one tide Sharpness to Bristol passage before whilst sticking to the speed limits, Brian Hudson’s Westerly Whitewater Wolfe 46. We know Brian well from his efforts with our Voyage of Hope fundraiser (another connection with Gloucester Yacht Club) and can imagine the broad smile on his face when he achieved that feat.

As for us you can guess the rest. Howard keeps a diary in which the very occasional day is inscribed with red ink, literally a red letter day. The 12th day of May in the year of the Lord 1999 is going to be one of those, apparently.