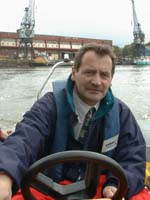 Whether he realises it or not, Harbourmaster Geoff Lane is a keen ambassador for the fascinating areas of water under his control. Arriving in his RIB on a drizzly late morning, he offered us a tour of the winding Floating Harbour and its various arms that opened our eyes both to what the City of Bristol once represented and what it is gradually becoming.

We had already taken in some of the most obvious sights to the west of Prince Street Bridge from Missing Link when arrived, but Geoff was soon heading the nose of his well-travelled Avon further into the heart of the city. All around was a mix of traditional buildings and modern structures. Where the latter have been built, rules have been put in place to improve the infrastructure both for boats and for pedestrians who want to amble around the harbour. One day in the far off future it might be possible to take the very substantial walk around the whole lot without leaving the waterside.

It doesn’t work everywhere at the moment, but there was more than one moment where the view seemed uncannily like a trip through Amsterdam. Our tour certainly provided a fascinating cross-section through many centuries of history. What a shame that only a small proportion of Britain’s boatowners have discovered this gem.

That said, Geoff has already got about 500 boats on his books, some on quays, the balance on an expanding number of modern pontoon facilities. Although we stayed at the more distant Baltic Wharf, the main run of visitors’ moorings are right in the heart of things and are served by water and shorepower points.

Geoff dropped us off close by in St Augustines Reach. We needed a forecast, so why not pay an unscheduled visit to Bristol Weather Centre?

The staff there were no doubt surprised by our arrival, but were kind enough to show us around. In the increasingly commercial world of the Met Office there was no way we would be allowed any weather information, printed or verbal. But by peering at the fascinating charts on computer, updated live, and by looking at the paper print-outs scattered across desks, we could see the low that had been throwing so much rain in our direction was gradually filling and a high was on its way in.

“How can you tell what the wind direction is in the Severn Estuary?” we innocently asked. The helpful team there, clearly doing their best to keep corporate gags on but uncomfortable in having to do so, equally innocently replied with a point of the finger and an explanation (just to aid our research of course): “15 knots south westerly, expect no more than 20 knots”. That was good enough for us.

We don’t feel too bad about our crafty pursuit of free information, having spent a fortune on the MetFax service over the past few years. We have also suffered a slightly indifferent start to using the Met Office’s MetWeb internet service in the past few days (of which more in future reports).

Time is always in short supply on Grand Tour stopovers and instead of strolling back to the boat via the chart agent we now had to make up a bit of time. The black cabs passed us by and the mini cabs waved us away. Fortunately Matilda’s brilliant yellow form could be seen making her way under St Augustines Bridge.

Our timing was immaculate for a run back along the harbour courtesy of the Bristol Ferry Boat Co. Within a couple of minutes we were tucked up in the wheelhouse discussing Matilda’s vital statistics. The 44ft purpose-built launch is driven by a pod-mounted prop that swivels through 180 degrees. A 90hp Ford diesel mounted transversely at the stern powers both this, and her bow-thruster, via hydraulics. Hence helmsman Mark’s ability to turn her on the spot, or ever so gently rest her alongside Missing Link to allow us to disembark.

Following a quick foray to the nearby shop and an equally quick bite of lunch, it was time to head out again. We had been warned that there had been a slip under our berth and it was a little shallow; though we thought we were clear, the starboard prop clipped something, so we had an anxious moment trying to tease Missing Link out on port engine and bow thruster alone.

But then everything was plain sailing, Dockmaster Captain Bill Folley organising our movement through Junction Bridge and into Cumberland Lock without fuss. Once inside the basin, there was time to listen with fascination as he described some of his experiences on fast catamaran ferries, both close to home and when bringing one back from Australia. 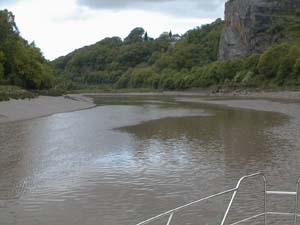 The Avon at low water is rather different to the high water version we had seen before. The gorge is still daunting on either side, but it grows the addition of muddy banks at its borders. Not that depth was an issue; we didn’t see less than 3m and often more.

On the way up we had focused our expections on Clifton Suspension Bridge. But this time around there was more time to take in the detail such as the watch towers that once reported the movement of great ships and the Adam & Eve Chapel, an open white-painted structure where outward-bound sailors used to cross themselves before braving the world’s trading routes across seas and oceans.

Checking in with Avonmouth Radio we noted the likely ship movements, a couple of vessels making their way into Royal Edward Dock and a car carrier outward bound from Portbury. Then we enjoyed another friendly wave from the Signal Station itself before popping Missing Link up to 22 knots and heading out along the Bristol Deep.

Our Severn Estuary visit has been enhanced by the professional and constructive way in which VHF is used in these parts, both for leisure and commercial traffic. Long may it continue.

Exercising our pilotage between buoys was no problem and although the sea started to get a little livelier, we were soon off North Cardiff. Turning downwind and dropping off the plane, we awaited the arrival of Newport Diver, an 80hp Yamaha outboard powered 5.3m Humber RIB with four members of the Newport branch of the British Sub Aqua Club aboard.

Soon the white splash of the RIB’s bow wave could be seen making its way towards us, then the whoops of its occupants could be heard as they crested the short 1m-1.5m waves. Pictures taken, Newport Diver and Missing Link turned for Penarth.

This time around our entry was as absurdly easy as the previous one had been difficult (see Grand Tour Day 18). The reply from barrage control on Ch72 was helpful and the bridge lifted on request. We already knew that the marina would be a ready and welcoming place and the expectation was met in full.

Once inside we put the covers up, threw the heater on and got the coffee pot working overtime to warm the chilled forms of Carol Johns, Gerald Meavan, Kevins Rogers and Beech. I had been slightly worried that they actually did their diving in local areas, wondering how on earth they could see anything, let alone deal with the Severn’s fast flowing current. But Newport BSAC members, currently numbering about 35 in all, are cleverer than that, using the handy M4 motorway link to explore the bluer waters of West Wales and the West Country.

Most of the members either have, or are working towards, their BSAC Sport Diver qualification, which allows them to swim down to a depth of 50m. Last season’s awful weather handicapped the group somewhat, although there were still stories of exploring Cod Rock in Devon (near where we had wrapped a seagull around our prop) and of sleeping on the beach at Brixham late last August.

It’s not often motorboat owners get to meet up with divers, unless facing the crisis of a prop that needs clearing. Otherwise an A flag on a support boat and the surface floats that groups of divers now often use are signs to keep well away. Perhaps both groups should get together more often when back ashore for, as we watched the Humber disappear back into Penarth’s lock for an appointment with a slipway outside, we had been reminded that our common interests are many.