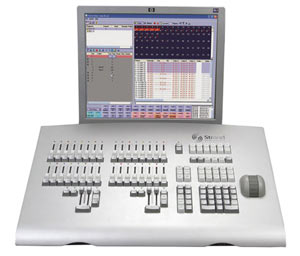 I got my hands on a Strand Classic Palette lighting desk for the first time this weekend, after getting called in to design and rig a dance school show at Bearwood College Theatre near Reading.

Knowing time was tight I was really pleased to see that I could download a copy of the ‘Offline’ version of Palette onto my PC laptop which gave a bit of a chance of practising with the system prior to bashing in around 160 cues. Useful, even if it did keep me up rather late the night before an 0800-2300 rig and technical (okay, so what, but it seems a bit harder to do that kind of thing compared to the all-nighters I pulled 20 years ago).

The Classic Palette seems to have had a bit of a mixed review over on the Blue Room forums but, a few quirks at the outset to one side, I had a pretty good time with it and found myself moving increasingly from keyboard to mouse as the weekend moved on. Aside from a shut-down hang (show remained saved without an issue) the system seemed stable. The thought of running a show-critical system off Windows XP did not exactly fill me with hope beforehand but the evidence at least in my case seemed to ease those worries.

Traditionalists this side of the Atlantic will no doubt hate the idea of playing with ‘Looks’ instead of subs or groups and I had to have a couple of goes at setting up these looks to my satisfaction.

Incidentally they’ve been doing a fair bit of tidying at Bearwood College Theatre of late; there were a couple of small issues to fix and hand-winding the bars hasn’t got easier but it was fun working there. If a rich uncle (of which I am unaware) left me a large fortune I’d like to work on making it a small fortune by creating a 350-seat theatre of this style.