Terrible news; an email arrived telling me that Geoff Bamford died yesterday of a heart attack. 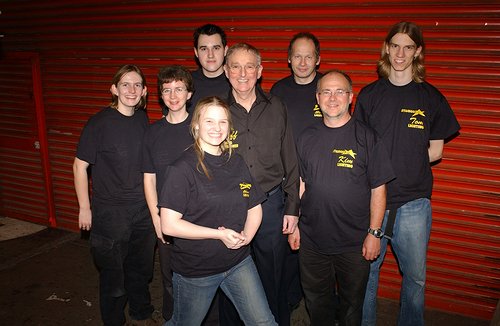 It was Geoff that got me involved in lighting again, ironically after suffering his first heart attack. I’d actually been asked to substitute for him as a lighting designer on a production at the Hexagon theatre, Reading, which nearly put me in similarly poor health as I hadn’t worked in such a large venue before. Fortunately he recovered in time to do the job himself and I went along to assist, which suited me just fine. Since then I’ve worked on quite a few occasions with him, although only a fraction of the many productions he designed for Reading Operatic Society, Sainsbury Singers, Starmaker and many other companies in and around Berkshire.

While he had a keen knowledge of all things theatre, lighting was Geoff’s life and imperfect health couldn’t keep him away from what is not the most relaxing of possible leisure pursuits. He retained a keen sense of balance between doing a great job and getting the job done, invaluable in the world of amateur theatre where time is always limited and the more technical aspects of the production are often squeezed into just a few short hours. I certainly wouldn’t be involved in larger shows now without his encouragement and coaching, a debt that there will now be no chance to repay.

Many people will miss Geoff and it will seem very strange working on productions without him.

Since learned that his Joyce, his wife, has suggested contributions in aid of The Cardiac Fund – Royal Berkshire Hospital.