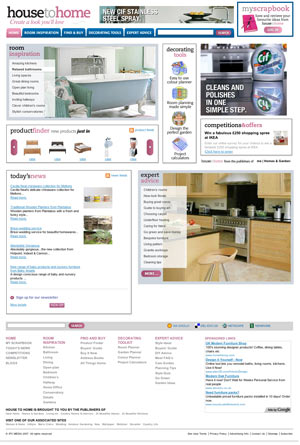 Have been a bit buried of late getting a new website launched.

House To Home is the second website we have launched on our new Symphony-based in-house developed CMS platform and the third major launch for my team this year, following Country Life in February and InStyle in May.

House To Home’s key feature is its broad range of room planning and decorating ideas, presented in gallery form. The site already has over 3000 articles in it, which is a massive achievement for the editorial team given the short deadlines involved.

The site itself represented a first airing for several new modules on the CMS including gallery, quizzes, notebook and product directory, as well as a premiere outing for new search tools based around the Nutch project. So there’s been a fair bit to bed in and we’ll no doubt be fine tuning and fettling for a little while longer yet.

When you work so close to a project for so many hours you start to lose perspective but fresher eyes than mine seem to be suggesting they like the look of what is a very heavily graphically focused site.

Not that we’ll be able to rest on our laurels; this is just the first in a series of phased launches for the site which will act as a flagship portal for IPC Media‘s homes brands including Homes & Gardens, Ideal Home and LivingEtc.

Our next website launches happen in June in a very different market and we also have two sites planned for July, each of which being different again so plenty to keep us out of mischief at the moment.

ps – nice comment about House To Home here on the Shelterrific blog.