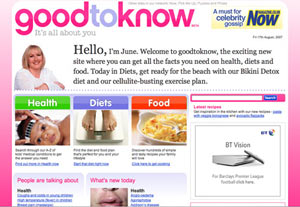 We’re beginning to reap the benefits of an awful lot of prep work in the team earlier in the year, and there’s no better illustration than IPC Connect’s recent launch of the new Good To Know portal which uses the IPC CMS2 project as a platform.

Following an extensive period of research the site maps and designs were in with my team at the end of May and we were in a position to roll out the site’s first three verticals covering diet, health and food at the beginning of August. It helped a fair deal that we had pre-prepped CMS modules waiting to provide much of the initial functionality.

That timetable also worked thanks to a highly collaborative process where we knitted together product and project management, developers and designers right alongside the brand team headed by editor June Smith-Sheppard, Publishing Director Oswin Grady and freelance digital designer Jesse Lewis.

While anyone can use a lift to travel a few floors in our building (and they are a lot quicker here in IPC’s new building compared to our old place) I think we’re really reaping the benefits of placing the web development team right in the middle of the brand teams (and hence be seen as a more creative function) rather than taking a remote space that resembles some kind of IT Area 51. It’s a real bonus for my team to work with such a wide spread of people here at IPC Media – print publishers and magazine-grounded people in particular are often seen as not getting ‘the Internet’ at all but like all throw-away lines that one takes a sometimes applicable grain of truth and makes it universal gospel – it doesn’t really say anything at all about the instinct and talent that sits inside this building. Harness that with some of the great digital developers that we have employed in the past 12 months through a slow and sometimes painful recruitment process, add a sound technical strategy and you create a very interesting basis for website development.

Good To Know is now in beta form with plans to release new features on a regular basis from now on. Some things we are pretty sure about but no doubt the users of the site will push us in as-yet unforeseen directions as the site expands.