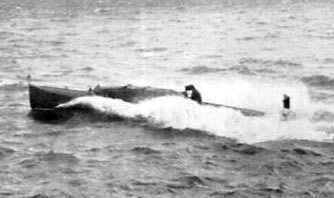 No, not spectator boats. Competitors.

Okay, it last happened in 1908 and attracted a field of seven boats, 13 men and one woman across three classes – which might just explain why it didn’t survive beyond the London event, the only motorised event to make it into the Olympics. In fairness enthusiasm was probably not in short supply but the low numbers were caused by multiple pre-start withdrawals thanks to an August gale on day one and high winds on day two. The course was due to run out into the Solent but was re-arranged on the more sheltered Southampton Water between Netley and Calshot.

According to the official Fourth Olympiad report “Then came the race of the day. Wolseley-Siddeley (Duke of Westminster), Daimler II (Lord Howard), and Mr Thubron’s Camille (from France) all came from their moorings to contest the third Olympic gold medal. The Duke of Westminster was once again at the helm of his boat, Capt. Sir George Clowes keeping his place as engineer, while Mr. Atkinson replaced Capt. J. F. Laycock as the other member of the crew. Just before the start, Daimler II showed a fine burst of speed, but just as the five-minute gun fired she developed some trouble, and, after hanging about and cruising at slow speed for some time, she turned and went away down the course without crossing the line.

“Meanwhile, Wolseley-Siddeley, after waiting for Daimler II, in order to make a race of it, started alone, to be followed, however, shortly afterwards by Camille. Wolseley-Siddeley finished her second round in 18 min. 8 sec., this representing a speed of 26.6 knots, which was as much as could be expected on such a day, and, as she had then nearly lapped 230 Camille, it seemed safe to conclude that the third gold medal would also go to an English-built boat. But it was not to be.

“This finished the racing, which had proved most disappointing from both the record-breaking and spectacular points of view, but which furnished another instance of what can be got out of modern boats when handled with skill, nerve, and determination.”

That final paragraph is quite funny – I know many people who would be quite happy to get 18 knots average out of a 36-footer in half a gale, one whole century on.