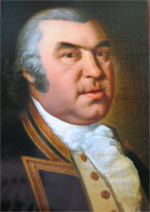 I saw this reference once before, then promptly lost it. But it seems one William Hollamby served on the Discovery for Captain Cook’s third voyage in 1776.

He had many adventures on other ships after that and, thanks to a series of bloody encounters, rose through the ranks to eventually make master and commander. His timing was a bit of a mixed blessing – peace broke out so he probably got to live longer but he got all the downside of having to live ashore in the style expected of a RN Captain on the half pay that was the norm when there were no French or Dutch ships to engage.

Margaret Dierden is the author of research on William Hollamby on the Captain Cook Society site. An extended version of her research can also be found on John Robson’s Captain Cook site. Her articles show a number of other interesting Hollamby connections – William’s brother was a major of Bombay and his niece became the second wife of Sir Thomas Stamford Raffles, founder of Singapore.

I don’t have proof that our branch of the Hollamby clan can claim a direct connection to William (at first glance it looks unlikely) but it would be fun to believe that’s why great grandfather and grandpa sailed model yachts, dad got the boating bug and I was quick to follow.