Navigation log
1650: slipped berth G12 Port Solent.
1705: locked out.
1710: initial chart plotter trials on a run through Portsmouth Harbour at 6.5 knots. All systems checked out with the exception of the Silva unit, which may have an NMEA 0183 wiring problem.
1740: arrived Haslar Marina, moored in visitors’ area starboard side-to.

There has been no chance of a lengthy preparation, thanks to an office relocation and a house move, so the appointed date has arrived with a thump.

Ahead is a big adventure or, to look at it another way, a big task. Our ambitions for Motor Boats Monthly’s 1999 Grand Tour included meeting up with readers, learning more about the cruising areas on our schedule, gaining editorial and photographic material, putting serious sea time on various bits of equipment on test and promoting boating in general and the magazine in particular. Deep breath. We had also promised to post daily internet reports and weekly newsletters, and to highlight the RNLI Offshore membership drive.

There is nothing in the programme that cannot be achieved, so long as we don’t expect to sleep for five months. Fortunately we’ve started modestly enough with a gentle run through Portsmouth Harbour to rendezvous with a 19 strong Motor Boats Monthly Cruising Club fleet at Haslar Marina in Gosport. 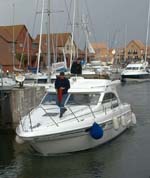 All the time we were sat in our home berth at Port Solent making final preparations there was a sense of anxiety over the many jobs that we should have done, but haven’t. Now we are underway the spirits have immediately lifted. What a difference a few scant miles can make!

Missing Link is temporarily armed to the gills with a bench full of chart plotters in order to prepare a series of articles on electronic cartography for the magazine. Included in the line-up are Navionics plotters from Silva and Geonav, C-Map plotters from Raytheon and Cetrek, plus a Panasonic Toughbook PC running all manner of software to handle ARCS, Livechart and C-Map charts. We also have a neat little LG Windows CE palmtop on trial. What with late arrivals of equipment, wiring glitches and a fair tonnage of manuals, Alex McMullen, my crew for the first week, is beginning to run low on brain fuses before he has even started testing in earnest.

Weather is immediately raising its ugly head as a problem. The Cruising Club boats have an itinerary taking them as far west as Brixham by Tuesday 20 April but a low pressure system is threatening to keep participants closer to home. We could try and make a break on Missing Link for the Torbay area tomorrow (Sunday 18 April), but that would mean leaving the others earlier than expected. It would also mean having less time with readers to obtain their views on our chart plotters and losing a couple of boat-to-boat photo shoots that have been arranged along the way.

We’ve decided to take a view at 0900 tomorrow, once a new bunch of forecasts are in. The alternatives are a morning passage to either Weymouth or Poole, or a lazy lunchtime run along the Solent to Yarmouth on the Isle of Wight. The wind will decide.

One thing is for sure; no one on the Cruising Club is in much of a mind to get hammered with bad weather and that’s a view we are more than happy to agree with. There are more than 4,000 miles ahead of us and we’d like to keep body, soul and boat together at this stage.