Navigation log
Pay berth at Weymouth Marina. ??19.13 inc 15% discount for one night with no services as they are yet to be installed on the new pontoon on which we stayed.
0955: underway from marina.
1020: cleared Weymouth Harbour entrance after taking photographs. Speed to 23 knots. Sea slight, clear skies, light breeze, a perfect morning. Eyeball navigation along coast to White Nothe to rendezvous with Aqua Bell 33 Castaway for a photoshoot.
1120: west of Lulworth Cove having completed photoshoot. Meet Lulworth Range Control Craft.
1130: enter Lulworth Cove to join MBM Cruising Club fleet at anchor. Raft on Broom Ocean 38 Jodita.
1220: engine start. Hold in Lulworth Cove to ensure all boats are able to start and lift anchors.
1240: depart Lulworth Cove at tail end of Cruising Club fleet. Speed 15 knots to allow for chart plotter tests. Wind has increased a little to F3 S. Course laid to take us around Lulworth firing range which is live today.
1245: call Range Safety Craft on VHF Ch08 to thank them for their friendly assistance with information.
1250: W corner of range 50 35.50N 002 16.50W.
1310: SW corner of range 50 31.30N 002 15.50W. Passed by Condor ferry and two warships.
1330: SE corner of range 50 31.30N 002 06.50W.
1405: E of Anvil Point 50 35.50N 001 55.00W. Increase speed to 23 knots running downwind.
1420: Poole Bar stbd mark. Passing Aqua-Star 38 October Star; rest of fleet ahead.
1435: passing Poole No13 stbd mark near entrance. Speed 6 knots; stemming tide waiting for chain ferry and outward bound ship to clear entrance.
1510: alongside Castaway at Corralls fuel berth below Poole Bridge. Take on 343.90lt diesel at a cost of ??79.10. Engine hours port 270.9 stbd 272.9.
1535: through Poole Bridge on an unscheduled opening. Meet a yacht in the middle of the bridge; we are on green lights, he is moving against red. Try to make room for him but his mast hits open spans on both sides. Mast stays up, fortunately for him and for us also, given its likely trajectory.
1600: alongside berth D28 in Cobb’s Quay Marina. Wind rising to F4 SE and rain threatens.

Commentary
A tough one this, a decision to run east when you are supposed to be circumnavigating Britain in a clockwise direction. Tougher still when you awake to find brilliant weather and light winds. But the weather chart remained adamant that a nasty series of isobars was heading our way. The optimistic devil on the shoulder said it was a slip of the forecaster’s pen. The pessimistic devil said it would come to pass as foretold. We’re now in Poole, so you know who won the argument.

Not that the day was at all unpleasant. After a bit of a scramble to clear away the remains of a bacon sandwich breakfast, we made the 1000 Weymouth bridge lift. Then it was a case of loitering with intent to take some pictures before heading out into a sea only lightly dappled by a cooling breeze.

We went most of last year without stopping to take running shots of our Sealine F36 Missing Link. Given clear skies and the first class backdrop of Dorset’s cliffs and coves it became the ideal moment to catch MBM’s jack-of-all-trades Paul Berger so that he could point his lens in our direction. Then it was our turn to return the favour by photographing his Aqua Bell 33 Castaway, her recently restored dark blue hull reflecting the wave patterns as the purposeful sports fishing boat danced from one side of our wake to the other. 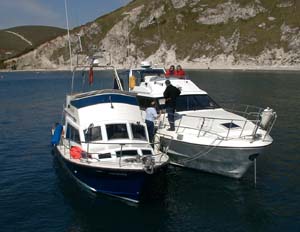 Our collective frolicking took us up to Lulworth Cove where a number of MBM Cruising Club boats were already at anchor. Entering this natural auditorium was redolent of a scene straight out of the Mediterranean; if only we had the temperatures to match.

All too soon though the curtain came down on this particular theatre of dreams. The emergence of grey clouds marked a strengthening of the wind, while the dark clouds of events in the Balkans meant a long diversion for the fleet around a particularly busy Lulworth Cove firing range. Far from being officious, the attendant patrol craft offered us friendly guidance in order to avoid becoming the unwitting victim of ‘friendly’ fire.

As if to break up the tedious haul through an increasingly sloppy sea, a couple of naval vessels put in an appearance, then a Condor catamaran ferry repositioning from Weymouth to Poole shot past with a Coastguard helicopter keeping close station as part of an exercise. We were intrigued to see if the Sea King would attempt to drop a winch wire at 35 knots but were not surprised to see that it didn’t.

Not the Alex was in much of a position to view proceedings as he was simultaneously running our navigation on two of the chart plotters we have on trial, plus a laptop. He has started to smile occasionally when working with these units, so perhaps we will get to grips with them after all in time for a two-part series in the August and September editions of Motor Boats Monthly.

One thing we have noticed is how much improved are the latest generation of LCD screens. The plotters are mounted on the far side of the saloon from Missing Link‘s inside helm and at something of an angle, yet we can read four out of five of them clearly.

The trio of electronic tracks traced our way into Poole Harbour and onwards past the quay and opening bridge to Cobb’s Quay Marina in the near land-locked shallow waters of Holes Bay. Even as we were securing the lines, the wind took on a new edge. Sensing the onset of a natural wash-down, we decided there was no need to hose off the salt and concentrated on making a very welcome cup of tea instead.

Now as this is being written, the rigging is singing, the VHF aerial is vibrating and the rain is being driven horizontally across the boat. Chances are we won’t be going far in the morning. Instead it will be a maintenance day, both on Missing Link and on other boats in the fleet. And there’s a little matter of sticking black masking and white reflective card all over the saloon in order to start photographing the plotters.