Navigation log
1410: slipped lines following safety briefing. Lifejackets all round and liferaft readied. Cushions stripped out of aft cockpit.
1430: through Poole Bridge. Wind F7 mostly S but with a touch of W. Harbour quite bumpy as we leave the Little Channel, sheltered in the Middle Ship Channel N of Brownsea, then bumpy again as we turn south trolling along at 5 knots to get photographs of chart plotters. Wind gusting to F8 with spume blowing from wavecaps. Impressive!
1505: leaving Poole Harbour entrance for a short run along fairway. Then turn.
1520: re-enter harbour and run along Middle Ship Channel up to first part of Wareham Channel. Then turn for bridge. Waves quite large in some parts of harbour; shipping a lot of spray, especially in gusts.
1630: through Poole Harbour bridge.
1650: alongside berth D28 Cobb’s Quay.

Commentary
We’d run for the shelter of Poole Harbour to give us the chance of furthering our tests and photography of the chart plotters onboard Missing Link. Now was the time to put theory to practice. 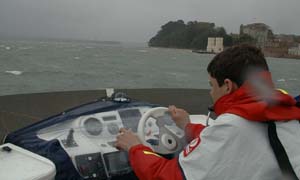 Who would have the better deal, Kim along with MBM Cruising Club members Ben and Mike on the flybridge, or Alex and William cocooned in a snug saloon with most of its windows covered? The former were in for a certain soaking with both varieties of water, salt and fresh. The latter were…well if you know anything about what can happen when you are rolled around with no sense of the horizon, you know the rest.

Part of the time we could use the most sheltered bits of the harbour. But more often than not we were trying to use routes in more exposed parts which had already been programmed into the plotters by Alex. So we had to chug along in as comfortable fashion as was possible and take whatever the baby rollers wanted to tickle up, both in terms of movement and spray.

A brief foray out into the Swash Channel, perversely somewhat calmer than the harbour immediately inside, gave a clue as to nature’s real force, in the form of foaming breakers painting a constant reminder of the presence of Hook Sand to port.

We didn’t linger though and soon decided to take one long run back up through the harbour before calling it quits. Two hours out in those conditions are probably more tiring than eight on a calm day.

Once back alongside it seemed the whole exercise had been pretty successful. The bridge crew got soaked, as expected, but Alex and William had somehow done enough to make the article possible without showing even the faintest signs of a green tinge.

Our respect for Missing Link continues to grow. Despite having a full planing hull without a keel, she had handled all the displacement cruising tasks asked of her without fuss and had not made life too difficult when it came to putting her back alongside. The only problem on the day was of our own making; not taking up the aft cockpit carpet had meant the drains couldn’t clear shipped water very well and we had two or three inches of slop all of a sudden that seemed determined to stay. Rolling the carpet back soon recycled the briny back to its proper place.

After putting the covers up and hanging out the wet weather clobber it seemed an evening off was in order. Alex joined the MBM Cruising Club for dinner at Cobb’s Quay Yacht Club, while Kim took a run ashore to meet up with friends watching Manchester United play Juventus at Da Vincis on Poole Quay. A top notch meal of king prawns and sole and a favourable three-two scoreline made for an altogether perfect evening.