Commentary
“I expect not many of your MBM Club members have seen Poole?” was the innocent enough question asked by the driver as we climbed the steps of his coach. We wanted to say ‘actually they’ve seen rather more than they bargained for this week’, but instead agreed and so were treated to a 10min video of the sun-drenched town at play while we took the short drive to Sunseeker International’s headquarters under leaden skies. 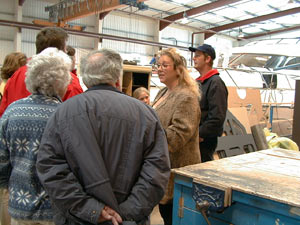 There our party of 26 were split into three to indulge in a round which included the company’s still relatively new superyacht shipyard, the Sunseeker Sales operation and the original premises, still going strong and fit to bursting, at West Quay Road. While the R&D facilities were off limits, there were signs all round of the kind of testing and development that this company now finds itself involved with.

When you get the opportunity to visit several boat factories a year you forget what it was like when you saw your first one. Looking around at the faces of our MBM Club members, it was easier to remember. It’s not every day you get a chance to clamber all over a ??2.2m boat, let alone one that is two-thirds finished and cruelly exposed to inspection.

The eagle-eyed got a brief chance to glimpse the cushions for Eddie Jordan’s new Sunseeker, due for delivery in time for this year’s Monaco Grand Prix, before sitting down for coffee. Amongst the idle chat that followed was some equally idle calculating of sums. If all the MBM Cruising Club fleet sold their boats and pooled the money, could the syndicate afford to buy a Manhattan 80?

Half-an-hour later, the contrast couldn’t have been sharper. We found ourselves sat in the clinical surroundings of the Royal National Lifeboat Institution’s heavy store at their Poole depot and headquarters. There depot manager Liam McKenna explained with a passion how his task, and that of his 50 staff, is to deliver parts as required to any of the RNLI’s 220 stations in Britain and Ireland at a moment’s notice. And by parts we don’t just mean a broken cleat or anchor. It could equally well be a Caterpillar diesel engine, or even a complete tractor and trailer rig for a slipway launched lifeboat that is required. For Liam, next day sounds too slow for delivery; he prefers to talk in terms of minutes and hours.

Our walk around the depot revealed just how much work is undertaken by the RNLI on site, with an extensive light industrial machine shop amongst the facilities. Given where they have to go, lifeboats have the occasional habit of marrying their sterngear up with rocks and other hazards, so it helps the budget if you can turn up your own propshafts.

We also saw a batch of Waverleys and a solitary Arun which are all bound for Australia. The RNLI’s charter calls for the Institution to sell decommissioned boats to life-saving services whenever possible and the recent Sydney Hobart race tragedy has created an immediate demand for better rescue facilities which these retired boats are shortly destined to fulfil.

The 1999 Motor Boats Monthly Grand Tour is committed to highlighting the work of the RNLI in its 175th year and to promoting the new ‘Offshore’ grade of membership aimed specifically at those who use leisure boats at sea. Strangely enough it was the wind, not our schedule, that guided us to Poole, but now we are here it seems highly appropriate we should have kicked off our efforts by visiting the Institution’s home of the last 20 years.

Our thanks both to Sunseeker and the RNLI for organising our tours at very short notice.

Returning to the boat we had more mundane matters to face. We’re using the time to test all the gear onboard and have deliberately left all the electronics fired up to see if all is well. It was, until the Seatalk chip in our fluxgate compass failed at about 1500. As the techies say, our data was ‘fragged’, which is a neat term explaining that nothing on the data chain will work anywhere. Not that we originally knew it was the compass at fault. First we had to isolate each piece of the daisy-chained gear in turn, until we found the culprit. Unsurprisingly it was the last item checked. Then we had to isolate it and put everything else back together.

There was some consolation from the three-hour job, insofar as we now have a much better understanding of how the boat is wired. We also managed to get at everything except the inner helm autopilot keypad quite easily. Even that was revealed once we took an ignition key panel out.

What is more, we have labelled all the Seatalk leads, so if another fault hits it ought to be possible to deal with it much more quickly. A new compass is on the way; a further 20min work should see us fully functioning again, provided we can perform the slightly awkward job of putting it back in its bracket under the floor in the forward bilge without drama.

We’ve given up guessing a revised schedule; the weather just keeps coming.