Commentary
We had just about settled in for the duration at Cobb’s Quay, or at least for one more day, when the wind dropped to idle as the low passed through. Frantic activity on the pontoon soon followed as the MBM fleet decided to make a break for the Solent. About 30 seconds later, we stirred ourselves also.

With just 15 minutes left to prepare the boat for the 1630 bridge opening at Poole Quay, the resultant scene was like something out of a 1920s silent movie. But somehow we were buttoned up and on our way.

Our plan was flexible. Worst case scenario was nose out, get bashed a bit and pop back to Salterns Marina near Poole Harbour entrance. Next best case was set a course for Portland, take a look and divert to Weymouth if we didn’t like what we saw. Better again would be to round the Bill and take on a couple of hours of wind over tide across Lyme Bay. We didn’t dare hope for the latter.

The navigation log tells the story. It was something of a surprise all the way through just how much the sea had dropped over not much more than a tide. And it was quite absurd how such a hastily planned passage should get all the salient factors right: gap in the weather, Portland at slack water and arrival at Torquay in the last vestiges of daylight, enabling us to keep our speed up. 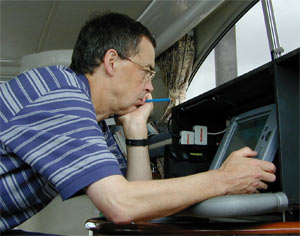 Alex must really have found his sea legs, for he spent quite a bit of the trip wedged into Missing Link‘s port saloon settee whilst juggling PC programmes, laying tracks and taking screen grabs ready for our article on the subject which will appear in MBM’s September 99 edition. Then for good measure he set up most of the standalone chart plotters we have on board as well.

With five different plotters running, three GPS systems and a radar, we had very little excuse for getting lost on this trip. Especially as Missing Link also has two good magnetic compasses.

That said, we still have electronic problems to deal with. The replacement compass arrived but was re-attached in a great hurry, which might explain why it is not talking to anything. And Kim has managed to prove his incompetence yet again by wiring the rudder reference unit in the wrong way (we think) when he reassembled the system yesterday. So the hatches will be up again tomorrow for a bit of remedial attention.

One result of all of this is we didn’t realise quite how much we rely on George, our friendly autopilot. Hand steering 79 miles was a real chore, although the burden was eased somewhat by finding an altogether pleasant way of slumping in the lower helm chair.

We also must remember to slow down for toilet breaks. Kim came close to breaking something, enamel, bone or both, when our Sealine fell off the top of a particularly big wave. Fortunately, save for a wobbly seat (the loo, not Kim) both survived the experience.

Needless to say we have a very smug feeling, sat here in Torquay and actually on schedule! Our final run in was fun, to say the least, and we saw 31 knots on the log, which isn’t bad given all the gear we are carrying. We want to calibrate the log with our radar gun, but there always seems to be six other jobs to do at the moment.