Navigation log
Paid berthing fee ??25.50 one night inc electricity.
1450: start engines.
1500: leave berth, loiter to strip fenders and take pics. Wind SW F3.
1515: depart harbour. Impromptu photographs of Princess 440, then loiter in the passage between Thatcher Rock and Ore Stone. Then increase speed to 27 knots. Eyeball nav to Teignmouth and Dawlish, then take a course of 070M across to the East Exe cardinal buoy.
1555: East Exe cardinal. Entrance a little sloppy as we enter. See 2.1m on depth sounder over bar. Speed 10 knots; down to 8 knots as we approach Exmouth.
1625: off Starcross.
1650: passing lock into Exeter Canal. Speed to 5 knots as we pass anchored yachts.
1700: get very thin on water on the run into Topsham; although following nav marks and chart have strayed a little from the channel. Depth sounder reads 0.0m at one point but we don’t touch. Check calibration!
1710: alongside W Trout & Son. 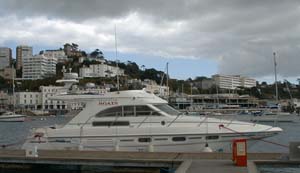 Awaking to brilliant sunshine, we didn’t need a second bidding to throw off the cockpit covers to chase away any residual dampness from the previous week’s sea spray and rain. The toolboxes came out next so that we could give the machinery a good look over. Other than topping up the air pressure on the steering system, everything checked out well.

Our twin mysteries over the electronics were quickly solved, given the more rational approach that time generally allows. I had connected the rudder reference unit to the autopilot according to the colour codes without a mistake, but the cables should have been reversed as the sender itself is mounted in such a way that it works backwards! Better still was the supposed fault with the new compass; upon discovering a dangling connector in the bilge we realised it helps to plug the unit in if I want it to work.

Ashore, tourists seemed to have taken the sunshine as a cue to appear in significant numbers, the predictable raft of gift shops that serve them opening up like multi-coloured flower petals in response. We suspected that Torquay hides its charm well back from the not especially attractive run of buildings surrounding the harbour. Some evidence of this was found by climbing one of the steep alleyways off Park Lane (which itself lies off The Strand) whilst seeking a photogenic view of the marina.

We had planned a very civilised arrival time off the River Exe to take high water up to W Trout & Son’s pontoon and boatyard at Topsham. But our timing went off, not least because we got talking to a number of Torquay Marina’s berthholders. Then having cleared away from the harbour we couldn’t resist nosing over to the twin peaks of Thatcher Rock and Ore Stone, before scuttling away northwards up the coast.

After an intensive week of peering at computer screens, it was a relief to do some good old-fashioned navigation using nothing more than the eyes, the compass and depth sounder. Finding the 10m contour, we happily followed this along to Teignmouth and Dawlish before tracing its curve further out to sea to avoid Pole Sand, picking up the East Exe cardinal pretty much where expected.

The run into the well-buoyed Exe was sloppy but very manageable as the SW wind picked up on the ebb tide. Pilot books provide plenty of advice to scare the wary visitor but whilst care is required, both with the bar at the estuary’s mouth and with negotiating the channel above which meanders from bank to bank, the rich rewards of stunning views and friendly welcomes far outweigh the perceived disadvantages.

Our lateness was a marginal worry as we passed the lock into the Exeter Ship Canal and headed up the final reaches to Topsham. Despite following the chart and the buoyage, we managed to get our line slightly wrong on a couple of occasions and at one point saw 0.0m on the depth sounder, fortunately without tickling the props.

The water deepened again as we dog-legged through the moorings off Topsham. Three generations of Trouts were waiting to catch our lines at the family yard that is a hidden gem. The outside pontoon berth enables a motorboat of 1m draught to stay afloat on neap tides and all services are available, including water, diesel, shorepower and gas. The view east is of a boatyard with an eclectic mix of long-keeled yachts and modern GRP craft buried in the midst of the town. Looking south to north through west you see mid river moorings with Devon fields and rolling hills beyond.

Lynn Trout had promised us 10 pubs and we were in just in the process of deciding which one to choose for an evening meal when the trip boat Sea Dream arrived and started to embark people in party mood. “We’re going to Turf Lock,” said owner David. “Would you like to join us”.

A little wary of gate-crashing a university graduation celebration swinging to a Yugoslavian combo of Totnes origin, we nevertheless soon found ourselves tucked up in former fishing boat’s wheelhouse. There it took all of three minutes to get completely slack-jawed while David and his partner Hazel told us how they not only live on Sea Dream, in the forward cabin tucked up under the foredeck, but have taken her on explorations as far south as Barcelona in the winter. 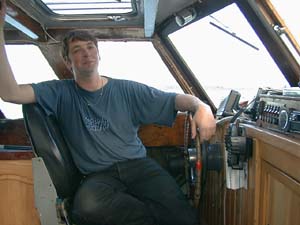 The photos of David wading through French canal water to break ice with a club hammer were enough to make our whole Grand Tour venture seem very tame indeed.

Once at Turf Lock we settled into the warm confines of the attendant hotel, feeling immediately at home after last visiting in 1992. On that occasion we arrived with 20 MBM Cruising Club boats. Sadly the authorities have given us the impression in recent times that a repeat run wouldn’t be welcome, but judging from the greetings we have received, they are very much in the minority view.