Commentary
We had big plans today for a boat-to-boat photoshoot session, followed by another run out to take radar gun speeds on a re-engined Fairline 36 Turbo for a forthcoming Test of Time feature. Unfortunately strong winds put a halt to that. 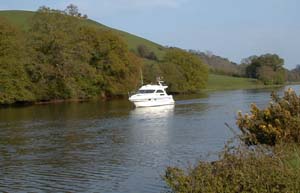 So instead we spent the morning pleasantly enough at Darthaven Marina. Jake and our newly embarked crew member Loris Goring spent a fair bit of time in and around the Fairline’s engineroom, checking out the twin Yanmar 350hp installation. I stayed on Missing Link, talking with local boatowners, catching up on paperwork and watching the Dart Valley steam locomotives huffing and puffing their way past.

One of the advantages of the River Dart is that it offers excellent inland cruising as well as a safe haven. Given a late afternoon high water and a decent spell of sunshine, we were perfectly placed to take the run up to Totnes. Better still, Loris’s four decades of boating experience in the area would see us safe without any effort on our part. 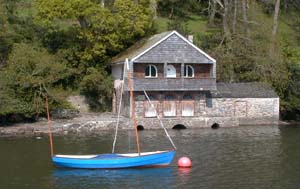 There isn’t a single reach of the Dart that you could call unattractive. Leaving the natural auditorium formed by Dartmouth on one side and Kingswear on the other, you amble past the industrial archaeology of Philips boatyard straight into steep-sided wooded reaches shallow on the inside of bends but often absurdly deep towards the outside. Features pop up in quick succession, even at the stately pace of the 6-knot speed limit. Agatha Christie’s boathouse, an awe-inspiring incline for Dart Valley’s locomotives to ascend, picturesque Dittisham…and so the list goes on.

We were a little late on the tide (I had decided to run some new cables on Missing Link and found myself still tangled with spaghetti when our original ETD arrived). The almost obligatory stop at the Steam Packet pub in Totnes was therefore out. We did however slow down to marvel at the length of shed at nearby Baltic Wharf where Pete Goss is building a massive yacht for yet another round the world race. Not for the first time in recent days our Grand Tour seems modest indeed.

All too soon we were back at our comfortable Darthaven berth, struggling to hear Brixham Coastguard’s forecast on Ch67. The NE winds sound as though they are going to be boisterous for the next couple of days at least. We’re going to stick our nose out early tomorrow morning in an attempt to make Salcombe for the day and Plymouth in the evening. Hopefully we’ll get some lee from the land once around Prawle Point.