Navigation log
0730: depart Darthaven. 0745: cleared Western Blackstone. Heading down Start Bay eyeball nav inside Skerries Bank. Wind a good 30-35kn NE. No real lee in bay. Speed 17-18kn. Waves around 2m but nice and long and not many holes.
0815: off Start Point shooting through inside passage. Long swell from overfalls in NW direction cancel out long swell from NE direction! Then NE takes over again as we clear.
0825: off Prawle Point; some lee now.
0835: Salcombe Bar, entering on western side. Speed 7kn.
0850: alongside Normandy Pontoon Salcombe. Interim log reading 3046.0. Port engine: 288.3hr. Stbd engine: 288.1.
1650: underway. Wind 20-25kn NE.
1705: clear of the bar. Speed up to 23kn.
1720: 0.5nm off Bolt Tail. Tuck round to follow coast around Bigbury Bay for for interest’s sake than for the lee.
1725: impromptu photoshoot with a wind surfer doing 23kn-25kn.
1735: off River Erme.
1750: between Yealm Head and Great Mew Stone, using church as an aiming point and heading for R Yealm.
1800: Yealm bar, speed 6kn.
1815: nosing up to Noss Mayo on the first of the ebb. Depth immediately downstream of causeway 1.5m. Don’t venture further!
1825: Yealm bar. Once clear of headland speed 23kn. Back out between Yealm Head and Great Mew Stone.
1835: off Shag Stone.
1840: Plymouth Breakwater eastern entrance. Off the plane.
1850: inside Mountbatten breakwater.
1905: alongside visitor moorings on outside of Plymouth Yacht Haven.

Commentary
Musing over the almanac and chart the night before, and conversing with our local knowledge Loris, we hatched a cunning plan to get up early to catch wind and tide together for a stab at Salcombe. That way we could arrive not too long after HW. The only uncertainty was just how much a forecast NE6-7 could be cheated, given that we wouldn’t get any real lee until past Start Point.

One of the beauties of a downwind passage in a decent planing hulled boat that answers well to helm is that it is comfortable, fast and often good fun into the bargain. The disadvantage is that you quickly become committed to pressing on rather than turning back, given that an up-tide, up-wind return to base will take a great deal longer and be considerably more uncomfortable. 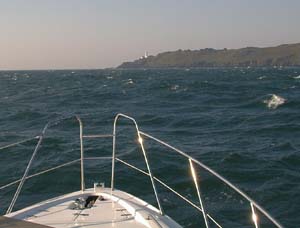 As we ran across Start Bay the big question was the likely anger of the seas around the sharply focused outline of Start Point ahead. The wind was, if anything, rather more than forecast, a telling 15 knots or so across the back of the head with accompanying transom spray telling its own soggy story and indicating 30+ knots of wind. Our chosen tactic was to take the inshore route around the off-lying Skerries Bank and then shoot the passage between it and the Point, taking a sniff at the overfalls to see how it all worked.

Not for the first time in this trip we couldn’t believe our luck. The seas grew a little larger as we closed the land but both the NE waves and NW-aligned overfalls were long and Missing Link romped over them with ease. There were quite a few pot markers to be avoided, but all were adequate in size and colour, well at least the ones we saw!

Having then made sufficient offing, we could head for a benign Prawle Point before turning into the small bay which leads to Salcombe.

The approach to the bar guarding the mouth of the estuary is no place to be in even a moderate southerly, but our NE gale was perfect for the job. Tucking into the cliffs on the western side to get the deepest water and looking across the calm shallows to starboard it was hard to imagine conditions in which the local lifeboat was tragically rolled some decades back.

Salcombe, population 2500, groans to 20,000 bodies on a typical summer weekend. And many of that number arrive by water. But there were few grockles about on our April weekday visit, waterbourne or otherwise, so we were allowed the rare privilege of stopping a whole tide on the Normandy pontoon by the town, a facility normally only available for short water and shopping stops. Otherwise you take one of several mid-river moorings or pontoons and hail the water taxi or take a dinghy ashore. 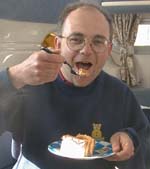 To celebrate the successful completion of passage, Devonian Loris assured us we had to obey the local custom of downing a second breakfast in the form of a large cream slice. That man will stop at nothing to get to a cake shop.

A stroll through the streets and a route march over the hill to North Sands Bay, returning via the shore road, filled our time very adequately; it also helped to shed some ballast from the slice. Not that Loris was having any of that; another cake was already lying in wait for high tea at 1500.

As the tide rose again, the wind appeared to have dropped a little. Given that, and the fact we could get a decent lee to Plymouth, it seemed a good idea to press on.

We’ve fallen into the habit of navigating by rock now, checking our progress on the chart against the features along the coast which are both rewarding to view and easy to interpret. So we picked our way along the coast, taking in the occasional rather different feature along the way such as the art deco hotel on Burgh Island which was recently up for sale, a snip at ??2.5m. 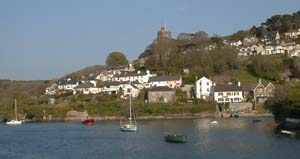 Life was so good it would have been a sin not to take a diversion for an hour up the River Yealm to check out Newton Ferrers and Newton Creek. Noss Mayo looked so peaceful we could have lingered a lot longer but the tide was already on the ebb and Missing Link isn’t designed to dry out.

Remembering our mission to meet people we just about managed to ignore the tantalisingly isolated visitor’s pontoon off Newton Ferrers. Minutes later Missing Link was out to sea again, rounding the aptly named Great Mew Stone from where the full vista of Plymouth’s great harbour opened up.

We’ve headed for the new Plymouth Yacht Haven off the Cattewater on the Turnchapel side tonight. Tomorrow we intend a morning catching up on chores. Then lunch up at Mayflower Marina to say hi to the team there who have been so good to MBM Cruising Club fleets over the years. After that an afternoon run up the Tamar and an evening stop in Sutton Harbour.

The NE wind can now blow as much as it likes in the next 24 hours. We’re not so keen on its chilly nature, but cameras thrive on the crystal skies it brings to these parts.