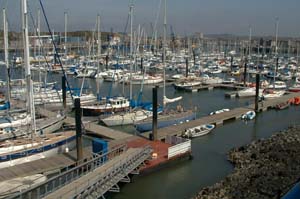 When we arrived at Plymouth Yacht Haven last night, we wondered if it was a little bit remote, being the wrong side of the Cattewater from Plymouth. But despatching Loris Goring as a dove was a successful exercise and he came back with a beak full of information about a watertaxi, a bus service, and more than adequate local facilities for those looking to stay closer to the boat. The showers are good too!

Loris also found the home of the builders for the Plymouth Nelson range, tucked up in the former flying boat sheds on Mountbatten. Just the day before we had been musing over the modern day use of these hangars; now we know.

Our thanks to marina manager Bobbie Blackler and her crew for making us feel so welcome, something we are now in danger of taking for granted here in the West Country – folk have been very kind.

Not that we had any fear of a change at our next destination. We couldn’t have visited Plymouth without popping into Mayflower Marina to see Robin Page who has been a good host to several MBM Cruising Club fleets over the years. When Robin saw Missing Link appear around the end of the mighty King William Yard, now no longer required by the Navy and in need of a new owner, he was half-expecting to watch 20 other boats arrive with us. It was not to be, although we threatened him that the Club will be back in force next year; if he was worried by the prospect he had the good grace not to twitch.

Our stopover here gave us a chance to rustle up some lunch, wait for the tide and watch a steady procession of Princess motor yachts making their way to and fro in various states of preparation from the nearby Marine Projects facility.

The company is responsible for rather more boat movements than the Navy these days, we suspect. That said, taking the last two hours of flood up the Tamar, we were suprised at how many ships were in Devonport flying the White Ensign and those of other European countries. The scale of the facility and the river that fronts it is awesome. A visit to Plymouth by boat without sauntering past at the regulation 50m off would be silly to say the least. 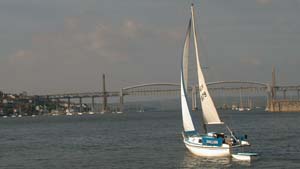 Once you’ve got that first mile or two up the Tamar, you just have to press on. To start with the spectacle of Brunel’s Royal Albert railway bridge entices from a distance. The structure is not particularly pretty and it is masked in part by its modern road counterpart immediately upstream. But the 1850s structure is a marvel to anyone with the slightest interest in engineering. Trains now tip-toe across the single line in deference to its age but did Brunel really think his creation would be carrying 125mph diesel locomotives well over a century later? If only bridges could talk…

Beyond the river turns rural, a little flat and uninteresting at first but soon more intimate and attractive. The first clue is the hamlet of Cargreen that sticks its stone quay out at you as an unsubtle hint to haul over and take a stroll across to its attendant pub.

Navigation is not challenging, mostly a question (as with all Devon rivers) of sticking to the outside of bends and following the line of the swinging moorings. That said, Admiralty chart 871 is a comfort. You might only use it once as a visitor, but the money will be well spent.

As is our tradition we were a little late, not least because we had slowed well below the 10-knot speed limit to keep our wash down. We lost the flood three miles below our target but decided to press on anyway. The rewards were firstly a perfect view of the National Trust’s Cotehele Estate, once a dower house, now a thankfully unspoilt reward for a much wider group of people. Then, turning the final 90-degree bend towards the former tin and copper mining port of Calstock beyond, an equally stunning sight of the town’s spindly railway viaduct lit by a golden evening sun.

Not wishing to press our luck, we turned to run with the ebb again, although given an earlier arrival and some care it ought to be possible to pick your way right up to Morwellham Quay, from where 50-ton barges used to ply. If you are braver still the disused lock at Weir Head and the mining village of Gunnislake await you.

A gentle run downstream was used to good effect. Loris was on the helm (a man clearly at peace with the world), Jake recorded notes of a recent New Zealand holiday on his laptop and I cooked dinner while breaking off occasionally to rewire our chart plotter test bench.

Missing Link‘s overnight stop is at the third of Plymouth’s four main marinas, Sutton Harbour, once a tidal basin but now a locked marina. It was dark by the time we put the last lines on and difficult to keep the eyes open as we chatted to MBM Club members Rupert and Brenda Moore on Sunkala. Fortunately they seemed to understand the effect a decent dose of Devon air can have on one.