Our cries taunted Loris, reminding him of his dire predictions of fog the night before. In fairness, whilst our Falmouth Yacht Marina mooring on the Penryn River was sunny and warm, we later discovered there was a topping of mist across the Fal reminiscent of a generous squirt of cream across a rich pudding. And out to sea, our compatriots of the day before on Sunkarla II were down to 6 knots in poor visibility.

The time had come for Loris and Jake to jump ship, although they set-to with vigour in the task of cleaning ship prior to departure. Our run through the mist the day before had coated Missing Link in a depressing grey film, but she was soon all white again.

No sooner had they left, than I got the surprise chance to put a face firmly to a familiar name. 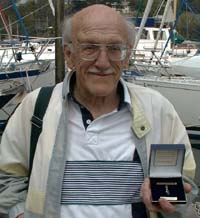 Frank Appley has never owned a boat. He probably never will. But a familiar correspondence has sprung up with the editor over the years, during which many of his thoughts have been expressed in the form of poetry.

Aged 82 going on 40, what Frank doesn’t know about the content of Motor Boats Monthly over the past 12 years probably isn’t worth knowing. Watching him explore Missing Link and make the most astute of comments about her layout and equipment, we had a strong feeling that he could probably have leapt on the flybridge, started the engines, taken her off the berth and headed for our next port of call. 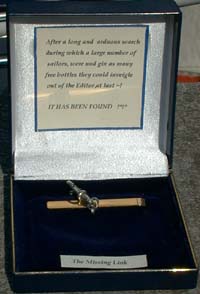 Alas it wasn’t to be. However, Frank was determined a little piece of him would travel with us and so it was I accepted the ‘Missing Link‘, carefully made by his hand and presented in a box in which it will indeed accompany the ship of the same name until she is decommissioned.

Frank has not been a Falmouth man for long, but we were not surprised to find out he knows the place like the back of his hand. So Sherpa Appley was employed as guide take us the couple of miles up hill and down High Street at sprightly pace in order to find the local Admiralty chart agent, Alan Hopton of Marine Instruments.

His hideaway can be found at the foot of Upton Slip, an atmospheric sanctity of an alleyway falling away towards the harbour from the main drag. Our mission was to collect C-Map electronic charts covering the rest of our trip, but we wound up vowing to order our future paper chart requirements from the wonderfully enthusiastic Scotsman. Everything we would need, Alan assured us, could either be found on his shelves, or be supplied within a day. 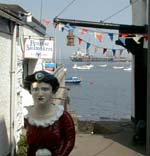 While Alan and I jawed about charts and pilot books, Frank stood off to one side and muttered dire threats about the youths who damaged Amy. The lady in question is a former ship’s figurehead who firmly guards the foot of Upton Slip where you can also find a chandler and sailmaker. She recently lost her head, literally, but by the time of our visit had been restored to her full beauty. Long may she remain that way.

Falmouth is a really useful place to call, a mix of tourist town, decent shopping centre, commercial port and leisure boating haven. What is more, it has a two-coach branch line that delivered Missing Link‘s latest crewmember, Piers du Pre, safely to his berth.

Thanks to his honest co-authorship of her biography, Piers will be intimately known as the brother of the talented cellist Jacqueline who was tragically taken from the world by multiple sclerosis. For the MBM team he is best known as father of a friendly family who have attended a fair number of MBM Cruising Club events on their Princess V39 Play D’Eau.

Piers’ boat is often raided for his other sister Hilary’s fudge, but this time around she weighed him down with a big tin of ginger cake (to die for). Added to the boiled fruit cake produced by my wife Michelle (a rich source of calories fondly known since the start of the cruise as ‘cherry ballast’), we wonder if Missing Link will ever get on the plane again.