Commentary
As a Port Solent berthholder we had originally planned to use some of our complimentary days at the Premier-owned Falmouth Yacht Marina to clean ship, carry out some maintenance and catch up on an increasing backlog of writing and picture editing generated by all the material gathered through the past week. We had also hoped to take an evening amble up the Fal.

The trouble was we had the perfect forecast for rounding Lands End. Plotting a course across a chart badly freckled with wreck symbols told us all we needed to know about the importance of that. We were also growing slightly worried about the presence of an Atlantic low that, if it arrived early, could throw our River Severn plans into disarray.

So the decision was made to make for Padstow Harbour’s evening tide. Piers planned the passage with the kind of precision which becomes a former Boeing 707 pilot, while I played grease monkey with the engines and galley slave with the sandwiches, fortunately not both at once.

There was a slight worry about the visibility. One not unrelated development was that we had spent part of the day before wiring in a Raytheon 520 plotter on the flybridge. Given its high speed data bus link to the Pathfinder radar downstairs Missing Link could now offer the facility to monitor not only C-Map cartography but also the radar at both the outer and inner helm stations. The only question mark would be over the system’s untested status.

As it happened, the system worked well on its first outing and the worst the visibility got to was around 2nm. It was just as well, for there were plenty of targets for the eyes to spot.

The first one to cause excitement was mainland Britain’s southernmost sentinel, Lizard Point and with it Missing Link‘s lowest latitude on the Grand Tour. Emboldened by the benign nature of the day, we edged further north than planned, which inadvertently carried us onto the next highlight of the day. 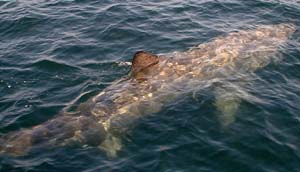 Three miles west, a lazy trio of basking sharks were feeding on plankton. As soon as the first fin was spotted, we dropped off the plane and fell into talking in hushed David Attenborough-like tones. By taking it gently, we seemed to reach a gradual understanding with these magnificent creatures who allowed us nearer without rolling over and diving away. At least two were babies, but with a gasp we realised the one we approached last seemed not a lot short of Missing Link‘s length. Trying to be objective (not all that easy in the circumstances) the shark was certainly somewhere around the 25ft (7.7m) mark.

Following their stately progress, stark white mouths agape, was completely hypnotic and a privilege keenly felt and enjoyed. But we still had a decent number of miles to cover and so, with regret, we said our goodbyes.

No less impressive in its own way was Longships Light, perched as a solitary mast at one end of its semi-submerged vessel of rocks which perfectly framed Lands End beyond. Again the light breeze made us brave enough to close for photographs, although the turbulence of the water stirred up by a tide hoofing northwards made us wonder aloud at what the place can be like in even moderate winds.

After that, it was simply a case of setting a long course for Trevose Head, the visibility lifting enough to allow a sighting of the brilliantly sunlit lighthouse from 15nm out. The 90-minute run gave us a little time to get adjusted to the fact that hazards were now to the south of us, instead of to the north.

Propelled by the tide, Missing Link gained the final waypoints a little early for the Padstow’s tidal gate. So we first opted to idle our way between the sandy beaches and green hills of the Camel Estuary, then captured a local buoy for half-an-hour in The Pool just outside the harbour whilst watching the flood gurgle past.

A mini flotilla of yachts provided a visual signal that it was the right time to enter, so we called the harbourmaster for berthing instructions and made our way up channel tight to the shore past St Saviours Point. Sightings of boats dressed overall and crowds milling around the quay told us that the town was not only enjoying a Bank Holiday weekend, but still in the throes of its May Day celebrations. It didn’t take much of a decision to decide to stay for more than one tide.