Commentary
For anyone looking for a different story or two Padstow presents itself as a very large candy jar for a sweet-toothed kid. Where to start, that was the obvious question. This Cornish harbour gives access to so many potential treats.

We could have deserted town in favour of the Camel trail to Wadebridge, a fascinating route for walkers and cyclists along one of Beeching’s axed railway branch lines. Closer to the boat we might have explored Padstow’s narrow streets, taken in the lobster pools, visited a beach, or caught the ferry to Rock. 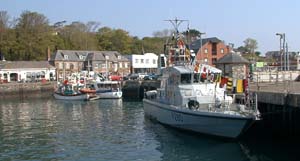 In the end the answer was to be found immediately astern of Missing Link in the form of P280 HMS Dasher. Adopted by Padstow and connected to Bristol University, this 20m (66ft) Royal Navy patrol boat had made her annual pilgrimage to support the town’s May Day festivities and was brightly dressed overall in signal flags that wouldn’t have disgraced a destroyer when we arrived. 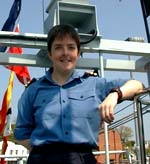 Dasher has caused quite a stir in recent days as she boasts the first female ship’s captain in the Royal Navy, Lt Sue Moore. Sue not only has to command the Portsmouth-based ship on her 100-plus days at sea, a job with quite a bit more variety than the average big ship appointment, but she also travels to an office at Bristol University to look after the 56 students in her unit. As a luxury Dasher’s permanent RN complement of five had temporarily been boosted by Sub Lt Sarah Nimmo-Scott at the time of our visit, but Sue is usually solely responsible for all the passage planning, navigation and watch-keeping aboard Dasher, as well as keeping ship, crew and students together.

Piers and I spent a fascinating hour aboard Dasher with her genial hosts, fascinated to learn of her role with students whilst watching Padstow’s Sea Cadet unit being instructed in throwing lines and tying bowlines on the foc’sle. 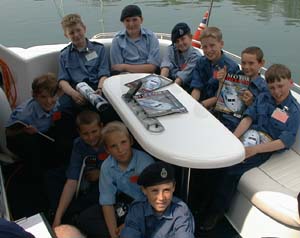 Later we were able to return the compliment in part by inviting the fine Sea Cadets of Padstow, and then Lt Moore and her Marine Engineering Officer Tony Yeomans, aboard Missing Link.

But first we had to indulge ourselves in the great MBM pasty trial. Would Rick Stein’s designer effort beat the traditional fare from Barnecutts?

For those not in the know, a pasty is a Cornish speciality comprising a pastry case filled, if the locals are to be appeased, with swede, potato and onion amongst its ingredients. We’re still deliberating the final result but have decided to put distance between ourselves and Padstow before announcing what is sure to be a controversial and potentially life-threatening verdict. Besides, we’ve kept one back of each for the 103-mile run to Penarth tomorrow.