Commentary
A real curate’s egg of a day this.

Everthing started well enough. As we prepared for a reluctant getaway Padstow gently shook itself awake, a veritable army of cleaners neatly sweeping up the detritus of uncaring Bank Holiday revellers whilst occasional early strollers sauntered by and greeted each other in friendly but hushed tones

We had heard that the 20m training patrol ship HMS Dasher was setting sail at 0800 and fully anticipated being able to set our watch by the pledge. Sure enough, she could be seen nosing her grey snout out of the harbour right on schedule as we finished fuelling on the outside of the south quay. Clearing away, we followed the proudly fluttering White Ensign a respectful quarter-mile astern until clear of the Camel’s charmingly named Doom Bar. With clear water available, we then took a run down Dasher‘s starboard flank to shoot nothing more sinister at her than photographs before looping round for a fast 30-knot flypast, an exuberant au revoir from one Portsmouth vessel to another. 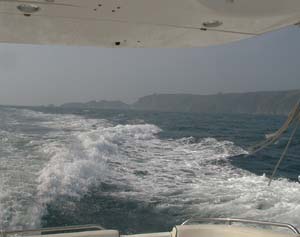 After that, there was nothing for it but to settle down for the long passage up the Bristol Channel via the wildlife sanctuary of Lundy. Not that boredom was allowed to set in for the sea conditions seemed to vary several times an hour. We had waves that resembled a wind over tide lop when all forces were in fact pulling in the same direction. There were calmer waters and long swells when we expected nastier bits. And perhaps most telling of all was encountering a F5 easterly for a bumpy spell when the forecast had originally promised a F3.

As a consequence our run along Lundy’s eastern flank, chosen for its exposure to the morning sun, was somewhat less pleasurable than it might otherwise have been. The view of this isolated green-topped isle rising sheer out of the ocean was not disappointing, but the way it kept rolling through more than a few degrees as we trolled along beam on to the sea was an annoyance.

Matters were not much improved as we turned Severn-wards to punch a big spring ebb and an increasingly sharp-tempered sea.

Eventually calmer conditions allowed us to stoke boilers and crack on through waters on a gradual turn of colour and texture from free-flowing deep Atlantic blue to bedtime milk chocolate drink. Only the sudden sighting of rafts of stark black driftwood and weed slowed our progress, the throttles being backed off to give a bit more time for frequent dodges in the final miles up to Cardiff.

Just as we hit our waypoint to turn past the South Cardiff cardinal, Ch16 woke up with the sound of Swansea Coastguard inviting us to stand-by on Ch67. Another confident voice then kindly questioning whether crew and ship were in good order, to which we were quickly able to respond in the affirmative, all the while trying to settle the autopilot on our next course change whilst dodging the bones of more driftwood. We were 75min overdue thanks to the weather and our crewman to be, Howard Jones, had started to worry about his South Coast friends.

Salt-caked and a little tired, we were more than ready to enjoy the sanctuary of Penarth Marina. But despite doing our homework with the Macmillan Almanac and the Admiralty chart we weren’t ready for what happened next.

By cross-comparing the two we already knew that our 1999 Small Craft edition Admiralty chart, just two days out of the shop, was badly flawed. It made no attempt to show the barrage from Penarth to Cardiff that will turn Cardiff Bay into a freshwater lagoon. However, we were able to cross-reference it against the 1999 Macmillan chartlets which showed three entrance locks with 24 hour working and so were happy to make an approach.

On the final run in it became about as clear as the waters through which Missing Link was chugging as to what we should do. A confident call to ‘Barrage Control’ on Ch72 (as per Macmillan), lifted in tone by the thought of the hot showers now just a mile or less away, was met with a flat ‘you’ll be lucky’ kind of response. Welcome to Wales!

Then as we applied the VHF equivalent of a thumbscrew, Piers’ firm but polite airline captain’s tone providing the impetus, it gradually emerged via several transmissions that we wouldn’t be able to enter until about three hours later and that there was nowhere sheltered to hole-up whilst waiting. In the end ‘bored of barrage’ suggested a call to the Cardiff harbourmaster on Ch14; this was met with a friendlier voice who offered the entrance channel to the working docks for a temporary haven as he wouldn’t have any ship movements for about four hours.

By then we had got close enough to see one reason for the wait; there was a lot of glistening mud between us and our original target, the lock complex’s outer harbour. Strangely there were no navigation marks or an obvious channel to it either, which should have given us a clue for later.

We gilled around for five minutes, still an hour off low water, deciding that dropping the hook in a commercial fairway was not on and spending three hours circling it wasn’t a great option either. In a westerly we could have held not far off Penarth Pier in the wind shadow of the land but the easterly made no sense of that.

So it was we made one of the day’s better discoveries. Why not use the time to explore the off-lying islands of Flat Holm, Steep Holm and the isolated, rather sad in comparison baby lighthouse known as Monkstone?

We might not bother with the latter again, the monk himself comprising an improbably narrow slash of rock living an equally improbable life at right angles to the rapid tidal flow. But we could feast our eyes on the lower-lying Flat Holm and the giant rocky scone of her steeper sister time and time again. 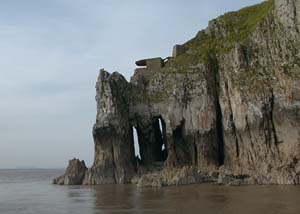 Honing our pilotage, we closed right up to Rudder Rock at Steep Holm’s canoe stern to marvel at the ship-like wake streaming back from it. A man-made pillbox at its stock reminded of the sometimes ugly works of man but took nothing away from nature’s sculpture. A couple of hours before we could have left the Severn Estuary and never returned; now we wanted to see much more.

Following a brief sweep past Weston-super-Mare on the English shore in honour of my mum, who spent part of her childhood playing on the miles of glorious mud revealed there at low tide, it was time for a gentle displacement cruise back to Wales.

We were in no hurry, deciding to add the best part of an hour to the prediction given by ‘bored of barrage’. Once across and edging closer we called him again asking if we were clear to proceed and were told there was now 1.4m over the cill. Telling him that was enough for us, the reply then came back that the bridge would lift shortly.

Not having seen a bridge in Macmillan but hearing talk of a cill, we thought it reasonable enough to tiptoe our way into the lock complex’s outer harbour. The lack of leading marks or buoys felt strange but we had found enough depth and also drawn the conclusion that no-one wanted to make entry particularly easy.

No sooner were we inside than we were out again, being chased away both by an angry tannoy and a work launch. At first we thought the garbled message had said something about ‘still not prepared’, but then it bellowed ‘underwater obstructions’. Get out of here!

Another call to Ch72 finally yielded the truth; we needed to aim for a lifting bridge on the last section of barrage yet to be closed which could be found immediately to the NE of the sluices. Holding off, we waited for the bridge to open fully, even though it needn’t have opened at all for us at that state of the tide. Then we gnashed molars for another five minutes until three reds turned to three greens, checked a depth gauge showing 2m and entered, turning sharp left as instructed.

Our woes had just one more throe. Turning to aim for the very visible boats a short way along the River Ely, Ch80 crackled into life, Penarth Marina guiding us back to their entrance, almost invisibly tucked close in by the inshore side of the barrage locks.

As we entered the deep lock to the former coal harbour, the bottom gates closed, the top gates roared and we climbed what was probably not far short of 10m or so on the captive pontoon to which we were secured. Missing Link and her crew were past caring what happened next. But the Penarth Marina team were excellent, giving us a comfortable berth in the outer basin of this very attractive haven, laying on out-of-hours diesel and offering to do anything else required.

Howard, Missing Link‘s local knowledge for the next few days, was a hive of industry sorting out our shopping and itinerary with an energy Piers and I failed to muster. With boat and crew washed down and fuelled, there were barely enough minutes left of reserve battery power to discuss the lessons learnt.

For our part, we should have contacted the marina earlier. Then we would have rumbled the truth about the entrance. We would also have discovered that the marina’s operator, Crest Nicholson, have secured the contract to manage the barrage locks and are already listening on Ch18.

As things stand the first of the locks probably won’t kick in until the end of May or beginning of June and the barrage itself is unlikely to be fully complete for some months after that.

Whatever our shortcomings, we were left with an angry feeling about the chart which doesn’t show any hint of a structure that has been evolving for the past few years. We’ve spent over ??200 this month on latest edition Admiralty publications for the Bristol Channel and Severn Estuary areas but can we trust them now?

As for Macmillan, it might well be that they were sold a pup by the authorities responsible for building the barrage who are running over-schedule. But it would have been useful to include some extra notes on the situation at time of publication. And they haven’t included any correction in their first set of amendments.

Our advice, do visit Penarth Marina, it’s worth the effort, but don’t waste your time talking with anyone other than them when making your preparations.