Commentary
Howard Jones joined us last night as our local knowledge for Missing Link’s foray up the Severn and the G&S (Gloucester-Sharpness Canal, not Gilbert & Sullivan for those who might wonder). Far from leading his army from behind (unless escorting one of his Severn Estuary convoys) Howard actively fronts the Gloucester-Sharpness Canal & River Severn Users Forum in their discussions with British Waterways and others over leisure boating interests on what was, until recently, a predominantly commercial waterway.

A resident of Abergavenny and an accountant by trade, Howard keeps his Princess 33 Sea Mist in Sharpness, our destination for the day. But before we would get there, he had planned some rather unconventional stops for us along the way.

Our departure from Penarth was a doddle, given that we now knew the form, It was with some regret that the tide called us out so early, for there had been little chance to do anything other than arrive, get sorted, sleep and then go. If weather and time allows we may return for another night next week.

Once outside, Missing Link‘s first task was to punch through some quite incredibly steep-sided brown walls of water up to the north of Cardiff Grounds and then across to Bristol Deep, before running along this main channel up to Avonmouth where the water was kinder.

Here we saw the rapidly approaching form of Sara 1, one of the Severn Area Rescue Association’s RIBs. The twin 70hp outboard-powered Delta was getting airbourne as she approached and our closing speed was over 50 knots, so it took no time at all to catch up with helmsman Wayne and his crew Andrew and Russell. They had taken time off work both to meet us and to act as a ferry, a kindness for which we weren’t quite sure how to say thank you.

Five minutes later we were stood off Avonmouth and I abandoned ship onto Sara 1 for the short run across to the Signal Station, the home of Avonmouth Radio, to be met by Deputy Haven Master Captain John Morgan and the Marine Officer on duty Terry Wiltshire. It is from here that the Bristol Port Company provides a vessel traffic service (VTS) for ship movements using Avonmouth and Bristol. 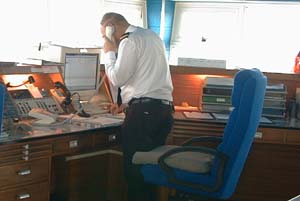 Although boats under 50 tonnes fall outside of compulsory reporting procedures, Terry was keen to emphasise that Avonmouth Radio encourage private craft to report in with them both as a safety measure and so that they can offer information on ship movements. For anyone used to the Southampton VTS ‘don’t call us’ approach to leisure traffic, this seems altogether more friendly. But being realistic it is a facility made possible by the fact that there are a much smaller volume of yachts and motorboats to be found in these waters.

One computer screen particularly caught our eye, its predicted roller coaster of a tidal curve being uncannily traced by another line representing actual depth. We’ve already heard many versions in the past day or so of the extremes of tide height and current in this area. But perhaps the most succinct so far can be found in a useful set of notes compiled by the local port authorities entitled ‘Safety Guidance For Small Boat Passage of the Severn Estuary’:

“The Severn Estuary has the largest tidal range in Europe, over 10.5m at Sharpness and up to 14.8m at Avonmouth, with stream velocities of up to 8 knots”.

Back aboard Missing Link, it was time to head further uphill underneath the two magnificent road bridges that provide fast links between England and Wales. Taking a car over them we’ve looked across and down and been awed by the muddy swirls beneath, one of Britain’s most challenging bits of water or rather, one of Britain’s most challenging bits of rock, mud and sand with a brief appearance of water for good measure. Now we were in it big time.

But if you cannot get it right with a local man aboard and a rescue boat ahead of you, then it is never going to work. So we were still vigilant but more relaxed about proceedings than would otherwise have been the case. Life seemed quite normal as we shot the Shoots and cleared the new Severn Second Crossing (actually the 102nd Second Severn crossing according to Howard, who points out there are 101 bridges above it) with a mere 35m or so air draught to spare.

But then came the suggestion that we should take a starboard turn over to Dun Sands to meet up with a 110ft sand dredger called the Hook Sand. It seemed a quite absurd proposition to veer off our safe track, but Howard wasn’t twitching so we shrugged our shoulders and went.

Sara 1 once again did the honours and Kim found himself scrambling over the bulwark of a near deserted ship. Once there all that could be seen was a solitary crewman sweating over a shovel as a hopper shot liquid sand into a near full hold, the spoil gambolling off across the side decks and back from whence it had come. It was a case of walk through the spoil, or try opening an ancient solid wood door into the wheelhouse.

I took the latter option and found myself face-to-face with Fred Larcombe, owner of a small navy of uncertain vintage, expert on tidal bores and laid-back retriever of 250-tonne loads of sand from bits of the chart most vessels stay well away from. Howard had said that the visit would provide a chance not only to chat about the Severn bore (a travelling steep-sided wave generated by tidal action) but also the one that occurs on the Yangtze. Fred succinctly described the Chinese version as ‘dangerous’, which from his mouth should probably be translated as don’t get within 100 miles.

The Severn might look mucky, but the sand that comes off its bottom seems wonderfully clean as it starts to dry. Suction pipe retrieved less than an hour after it went down and with another 250-tonnes of building sand in the bank, Fred pointed Hook Sand‘s bow towards Chepstow whilst conducting some deal or other on the mobile phone. The estuary can apparently spare the stuff, given that a couple of million tonnes travel up (and fortunately down again) on each tide. It was time to take our leave and transfer back across again in time to take in the sight of the long suspended span of the (original) Severn Bridge.

Once through and safely in the wonderfully named Slime Road channel, Sara 1 popped off briefly and magically engineered a crew change so that they could put Rose Price, currently the association’s only female crewmember, aboard Missing Link. Rose would have liked to join us earlier but had needed to drop her daughter off at school first, something that gives a clue as the nature of the volunteer association that runs Sara 1, amongst other things.

Established in 1973, SARA provide a rescue boat service in the Severn Estuary from Portishead to Gloucester, the tidal reaches of the rivers Wye, Avon and Usk and along the Welsh coast of the Bristol Channel to Newport. In addition, they also have cliff and mountain rescue teams. You can learn a lot more by turning your web browser to Severn Area Rescue Association’s website.

At Motor Boats Monthly we have heard local boatowners praise this organisation on many occasions, something that we fully understood following our morning with the grand people on Sara 1. One minute they might be dropping daughters off at school, landscaping a garden or selling someone a telephone. The next they are heading off to save lives in conditions ordinary mortals would have nightmares about. Bravo!

With Rose back with Sara 1 and the RIB making off the enable her crew to get back to their daytime pursuits, we were left to complete our run up to Sharpness. Howard assured us that there was now enough water to be a little lazier in our course-keeping diligence, but Piers and I wanted to practice using the transits that mark the deepest water. Most are obvious, others are slightly less so.

Another hazard we had heard about was the entrance to Sharpness. A tide sweeping across its mouth at several knots makes for a spot of bother as the bow comes out of the current while the stern is still in. We were close to high water by now, so the flow was not as extreme as it can be, but the entrance was a lot wider than we expected and so Missing Link popped through with a little waggle of her nose, but no drama. It was a lot easier than entering London’s Chelsea Harbour on a big Thames spring tide.

Now life started to become dramatically slower and more placid. Passing the small craft waiting pontoon that is under construction, Missing Link entered the ship-sized lock to be penned up to the Gloucester-Sharpness Canal above. Whilst there we paid our licence for the week, ??72 including ??40 for the two-way passage through Sharpness lock.

Then we slowly made our way past the busy bulk cargo facilities before turning into the arm which leads to Sharpness Marina. As we reached the junction, we could see the Severn immediately ahead and several feet below us.

Once safely moored alongside Howard’s boat, bow-to with a stern buoy to hold us off, the Sharpness Harbourmaster Captain Keith Badsey was waiting to take us to his nearby office. Wondering quite what might be in store for us now, we climbed three flights of steps to find ourselves face-to-face with several radar screens covering the Severn from the bridges to Sharpness. 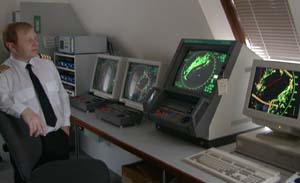 Howard was up to his organising best again and before we knew it, Captain Badsey had retrieved recorded information and played back Missing Link‘s progress, including her Dun Sands excursion, that morning. Whilst that ability was impressive enough, we were puzzled why the facility was locked, unmanned and therefore seemingly not of much practical use.

The answer came with the opening of a yellow briefcase to reveal a radar screen within. This is fed directly from the shore system via a VHF link, enabling pilots to carry their own independent information with them in addition to using the ship’s radar. The triumph of this must have been in compressing all the data well enough to make live transmission possible.

So far the day had been more than fascinating and it was only lunchtime. We had seen plenty of evidence of port authorities expanding their commercial traffic whilst still looking after leisure users, all very encouraging. The pilot books and cruising guides can scare you well away from the Severn; we are becoming enchanted.