Commentary
Our original intention had been to use Penarth as a transit port. But the place had grown on us and so it was no chore taking a layover day in the marina that is situated in a former 19th Century coal harbour.

Despite the modern dwellings that have sprung up all around the marina’s perimeter, there is still a real sense of history to the place. We were particularly drawn to a pair of dominant buildings set back against the cliff, currently shuttered and fenced off, but surely due for a new life. These once housed the telling and customs staff who oversaw the export of millions of tons of coal.

When the clerks looked out of their windows, quills poised over beautifully hand-scripted ledgers, they would have seen tramp steamers and sailing ships soiled black making their way to and from a dock that was built in a rebellious move to get around the heavy dues levied by nearby Cardiff. Now their ghosts look out across a gleaming white flotilla and its attendant raft of modern marina amenities on the one side and a most astonishing construction site on the other.

The build cost of Cardiff Bay Barrage would probably spill straight off those ledgers. At ??200m, it is not cheap. Neither is it anywhere near on time, which has been a cause of some confusion. But whatever you can say about its punctuality, you cannot knock its ambitions.

Once completed at the end of this year or the beginning of next, it will guard the whole of Cardiff Bay against the Severn’s massive saltwater tides. The Rivers Ely and Taff will then discharge their fresh into a man-made lagoon dredged out to give a minimum 2.5m depth and over eight miles of waterfront.

The installation of the three-lock complex will enable boatowners to have the first all-tides access ever to a Severn harbour. And even the outer harbour will be able to accommodate 200 craft at a pinch when acting as a foul-weather haven. 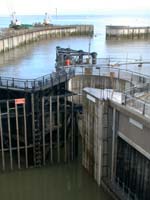 The lock chambers are of a daunting size, boasting gates 16m deep. Amongst their series of back-up systems they have a manual option; we only hope they have a keeper with the biceps to match. Speaking of the muscle-bound, you also cannot fail to notice the beefy lifting bridges at the far end of the chambers that are rated to withstand a lively breeze of 100 knots. Once the anemometer hits 40 knots they have to stay up or down, but the plan is they’ll all be lifted when that happens to keep navigation open.

Statistics for the sluices are no less impressive. When let go, they will discharge 2600 cubic metres of water per second at an estimated speed of 18 knots. Control will have to be exercised to ensure that sluice opening does not happen when a Cardiff bound ship passes in the narrow channel opposite, as the theory is that the hapless vessel will probably get pushed onto the mud, something guaranteed to irritate the pilot one supposes.

Fish are guaranteed a safe passage as they will get their own dedicated ??17m facility to transit the barrier at will. Not for them the need to book a lock. 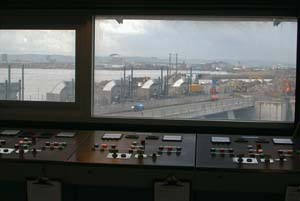 Penarth marina manager Charles Bush was our tour guide around the site. He has more than a passing interest in barrage affairs as the company for whom he works, Crest Nicholson, have also won the contract to run the locks. Walking up the stairs to the control tower, a clinically designed affair with a run of electrical panels sweeping around three sides, we met his team who are on standby ready to take lock number one into action on 24 May. At that point the navigation channel will be diverted through the lock and six months or more of further hard labour can commence to seal Cardiff Bay forever.

Once that happens, the plan is to establish over 2000 moorings in the area, that total including the existing facilities at Penarth Marina, the Penarth Motor Boat & Sailing Club and Cardiff Yacht Club. And there’s talk of a watersports centre of excellence and more besides.

Charles’ enthusiasm is infectious. He freely confesses having moved from the English South Coast with the baggage of a built-in bias against the Severn Estuary. But now he is truly converted to the waters without, and the potential within, Cardiff’s emerging barrage. Given our recent experiences it isn’t hard to understand the reasons for his conversion.