Commentary
“You can see where I come from. Let’s do the job, let’s get it all sorted out, cleaned up, dusted off, everything must be kept in its right way and then let’s go home because we’ve all got lives here. I’m afraid I don’t live, eat and breathe this because you can’t do it.” 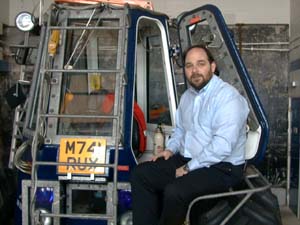 For anyone nurturing a romantic image of the Royal National Lifeboat Institution and its duty to save lives in peril on the sea, such an attitude regarding the running of an RNLI station might come as a bit of a shock. But Andrew Rabaiotti takes the pragmatic view on most things. It is no doubt essential when running his well spoken of Chandlers Wine Bar and Restaurant on Penarth sea front. And it certainly helps when settling into his Honorary Secretary’s hot seat just 150m down the road. 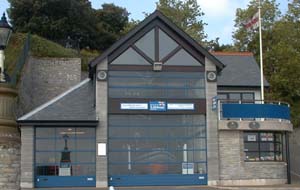 Amongst his RNLI responsibilities Penarth’s Hon Sec calls the shots for 19 operational crew, two trainees and a shore team of four. And he has ??1m of kit at his disposal including an impressive four-year-old building housing a 32-knot Atlantic 75 RIB hooked up to a launch tractor that would shame a Sherman tank and a smaller D-Class inflatable with its attendant baby four wheel drive. Across a busy road is a concrete slipway that is beefy enough to take a much larger boat if the need ever arises.

Having spent 15 years on the crew, Andrew gravitated to his new role four years ago and quickly found it placed him at odds with his colleagues on occasions. An Honorary Secretary and his deputy launching controllers have difficult decisions to make:

“At the end of the day my job is purely to say yes you can go out of the door or no you are not going out of the door, based on the information that I have got. When it all happens you’ve got maybe half-a-dozen people champing at the bit and boats going out and all the rest of it. Somebody has to make an assessment. The hardest job in the world is saying no.”

Sometimes the no decision is based on weather and sea criteria, the Atlantic 75 being limited to no more than a Force 6-7. But other factors might apply:

“I’m not prepared to put the Institution’s boat at risk when somebody else may be able to help or (the object) is beyond help anyway. But as soon as someone says there is life involved we will do everything we can.”

Each boat requires three crew and sometimes the Atlantic and D-Class are both deployed at once. With three times the potentially required number of crew for a double launch on the books that might seem a good margin. But Penarth is no longer the seafaring town of yore. All except a few of the crew have their careers very firmly ashore and many commute well away for work. One was in Australia when we visited! As a result the team can get stretched, especially as they typically deal with over 60 call outs in a year, around half of those to leisure boats. Andrew often finds himself doubling as tractor driver, a job for which he is qualified.

The need to retire crew at the age of 45 in order not to create long-term physical problems for them due to the lively motion of the inshore boats doesn’t help the dual priorities of retaining experience and numbers. “Crewing is a national problem which the RNLI are going to have to address in some way shape or form,” asserts Andrew. “They’re going to have to find some way of encouraging people.”

Not that boredom ought to be a problem, at least as far as the Penarth station is concerned. Andrew describes the Severn succinctly: “it’s a large lump of water and you don’t know what’s going to happen next on it.” But his boats also have to deal with calls on local rivers, including suicide attempts from the many bridges in the area. And they have penetrated much further inland via road trailer, being called upon to assist with flooding up at Hereford for two years in succession now. It is a much more hazardous type of operation than normal given that they have to navigate the vulnerable inflatable tubes of their D-Class over unknown submerged hazards in fast-flowing waters.

It is the crews you will have seen pictured in the evening news bulletins when the inshore lifeboats go to work in such ways. But, as we were reminded on our visit, behind the visible exploits there are always people like Andrew Rabaiotti who play an essential part both by keeping an objective view on risks and by fielding all the very many administrative and organisational matters that have to be dealt with.

Having allowed Andrew to step out of his Honorary Secretary’s job and back to his life at Chandlers again, there was fortunately enough time before the afternoon tide called to take a stroll through Penarth itself. 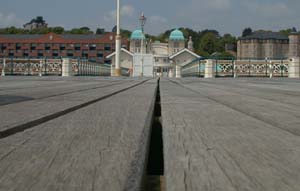 Amongst his RNLI responsibilities Penarth’s Hon Sec calls the shots for 19 operational crew, two trainees and a shore team of four. And he has ??1m of kit at his disposal including an impressive four-year-old building housing a 32-knot Atlantic 75 RIB hooked up to a launch tractor that would shame a Sherman tank and a smaller D-Class inflatable with its attendant baby four wheel drive. Across a busy road is a concrete slipway that is beefy enough to take a much larger boat if the need ever arises.
Although its origins lie in Victorian tourism, the place seems to have retained a dignity that many similar places lack. The only tasteless edifice on the waterfront, a dreadful multi-storey car park, is earmarked for demolition. But even now it is outshone by the pier, recently restored, clean and thankfully free of trinket booths and arcades, a really peaceful place to sit in the sunshine for a few minutes and write a postcard or two, which is exactly what we did.

Then it was a huff and a puff over the hill to the town itself, which sports a useful array of grocers, butchers and bakers, before descending to the marina on the other side and getting underway.

As we nosed Missing Link into Penarth Marina’s lock, there was barely 1m on the cill. By the time we had descended several floors to the basement, there was another 30cm on top of that and even as the gates opened we watched the tide rise another 10cm. It was a good reminder we were setting out on a big spring, although with a light north easterly we had no worries.

Our passage to Swansea was about as straightforward as they come, the only complication being the need to dodge rafts of driftwood from time to time. It was a slightly odd feeling though, planning an inshore track across the deepest part of the Middle Nash spit off Nash Point, depth 0.7m at chart datum, and seeing just over 10m across it on the depth sounder an hour before high water.

As the miles ticked up on the log the coastline was fairly bland, but became more interesting as we rounded the corner into Swansea Bay. First came the Legoland outline of picturesque Porthcawl, then the industrial sprawl of Port Talbot, a huge man-made cloud of vapour erupting from the steel works there just at the moment we passed by.

We had started to turn our attention to entry procedures for the Tawe Barrage and marina locks when Jake suddenly spotted a fin. Quickly dropping Missing Link off the plane, we saw what we think must have been a porpoise as it briefly looped through three or wavelets. But then it was gone, fed-up with our intrusion perhaps.

Excitement over, the end of our passage was made particularly straightforward by a high water arrival. Missing Link took free-flow through the Tawe lock and only spent long enough in the marina lock to collect berthing instructions and access cards. Then we could make our way through a swinging footbridge and secure lines right opposite the Maritime Industrial Museum and its selection of restored vessels, a large lightship standing head and shoulders above them.

We’ve arrived at another very interesting venue, one that again successfully mixes historic foundations and new motivations. The week ahead is scheduled for some necessary downtime both to give Missing Link a good once over, to catch up on work and to take the train home for a spell, not least for me to attempt to clear up a niggling case of conjunctivitis that has made one of my eyes painful and has just started to affect the other.