Commentary
Plans during the past week went a bit awry.

Having arrived at Swansea Marina and made some immediate friends amongst the berth-holders here, it was an easy decision to stay for our scheduled layover week to catch up on maintenance, cleaning, a lot of copy writing, page proof passing and a spot of home leave.

Packing up and shipping out for a few days felt a bit strange after the previous month of solid activity. But it was a comfort to leave Missing Link in safe hands and a great pleasure to see all of my family and my home again.

The only complication was that, for all sorts of reasons, it was not possible to get back for the one weather window in the week. So we are still in Swansea and, as a consequence, off-schedule for the first time on the Grand Tour.

Fortunately it’s not a bad place to be stuck.

The fully serviced marina is right in the heart of the Maritime Quarter. Its greater part is found in South Dock, once derelict and land-filled, but now a thriving haven for leisure craft, ringed by a well-spaced array of houses and flats, pubs, cafes, restaurants and shops.

Towards one corner the Maritime & Industrial Museum dominates, thanks not least to a lightship and two tugs moored right outside.

Wandering around to take a closer look I was surprised to see that entrance to the large building is free. Once inside, you find a mix of exhibits highlighting aspects of Swansea’s rise, fall and gradual rise again.

One section ably illustrates how the River Tawe’s twin assets of water and nearby coalfields attracted prosperous copper smelting operations in the 18th and 19th centuries. But the exhaustion of ore supplies from Cornwall, apathy and competition from abroad all played their part in turning a major industrial centre into a major industrial wasteland. The problems were recognised in the early 1900s but it is only in the last three decades that remedial action has picked up momentum.

Other areas of the museum cater for those interested in automotive, factory and agricultural machinery. And there’s a large working wool mill on site whose products can be bought from an above average gift shop.

But you’ll not be surprised to learn my time was mostly spent examining a fascinating range of ship models and actual vessels great and small. Amongst the latter group are two lifeboats, both notable exhibits.

The John and Naomi Beattie is a self-righting, pulling and sailing type typical of those used by the RNLI early in this century. She served at Aberystwyth from July 1906 to September 1932 where she was apparently pulled through the street on a carriage drawn by several pairs of horses each time the maroons went up. This launching method seemed a bit of a far cry from the brute force of the 167hp Talus tractor we saw attached to the Penarth Atlantic 75 RIB last week (see Grand Tour Day 29). 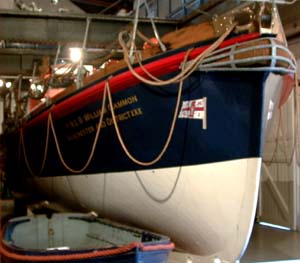 William Gammon was the coxswain of the station’s previous boat Edward, Prince of Wales when she was called to the 7200-ton cargo vessel Samtampa off Portcawl on a dreadful evening in April 1947. Force 10 winds broke former liberty ship into three sections within an hour; then darkness closed in and watchers on shore spent an anxious night looking for any signs of the crew, and of the lifeboat that was also missing.

When morning dawned it was seen that the bow and stern of the Samtampa had been thrown onto rocks while the bridge section, where the crew had been sheltering, was lying in deeper water. All 39 were drowned. A few hundred yards away Edward, Prince of Wales was found capsized. Coxswain Gammon and his crew of seven had also perished.

As fate would have it, the 30th lifeboat presented to the RNLI by the people of Manchester was undergoing sea trials prior to replacing Edward, Prince of Wales when the disaster occurred. The decision to add William Gammon’s name to her bow was made before she entered service in July of the same year. A half-century on she is safely under cover in the museum, a proud reminder of the heroism of crews who took to the seas in craft that didn’t have the speed, power or self-righting safeguards of today’s generation of lifeboats. 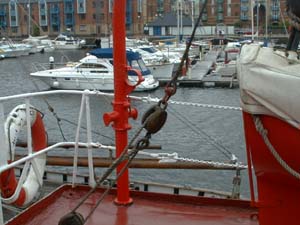 Before leaving I couldn’t resist checking out another reminder of the bravery of seamen in years past.

Lightship No91 has been preserved in full working order. As I paced her weathered decks towards a tall stem cluttered with anchor windlasses and chain, a generator throbbed reassuringly beneath my feet.

Very few parts of this 116ft (35.4m) long vessel, built by Philips of Dartmouth in 1937, are out of bounds to the public. And none are substantially altered from her last day of service in 1977, when she was marking the Helwick sand bank 5nm SW of Worms Head. As a result you get a very good idea how a master and his six crew would have lived. But only they know what it was like to ride out a severe gale on the round-bilged engineless ship with its tall light tower and masts swinging through tens of degrees.

Looking across to Missing Link from No91‘s lifeboat deck, I suddenly felt extremely grateful for the ability to stay in a place of shelter when the wind blows, as it is doing right now again. We are hoping that the southwesterly will ease later tomorrow so that we can recover some time and head for Neyland Marina in Milford Haven. From there we are likely to go straight for Pwllheli; Ireland is a bit of a dream in the prevailing weather patterns.