Commentary
It was a relief to get away from Swansea. When lines are attached to a pontoon for a week or more, a superhuman effort is required to move them again.

Not that it had been a problem staying for so long. Far from it; the marina had proven a safe place to leave Missing Link and I had enjoyed the mix of traditional atmosphere and modern 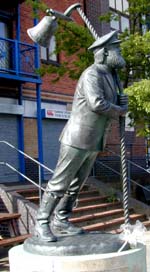 facilities that are a part of the make-up of the place. Town is a short stroll away and it offers a comprehensive array of shops, albeit in a rather heartless setting which has yet to recover from World War II bombs. But you are soon soothed again by the Maritime Quarter and intrigued by the statue of local hero Dylan Thomas outside a theatre bearing his name and by another representing Captain Cat from Thomas’s classic Under Milk Wood. His role?

“The sleepers are rung out of sleep with his loud get-out-of-bed bell”.

We needed Captain Cat’s bell and the eventual arrival of long promised lighter winds to get-out-of-marina. After a quickly aborted plan to go Monday evening, we instead found a more successful plan for the following morning.

For this leg to Milford Haven we were loosely accompanying Swansea berth-holders Nigel and Angharad and their recently acquired Fairline 36 Turbo Brival. Angharad, or ‘Harry’ to her heathen friends, is one of the established crew who work at the marina and we first met her the week before when she was dressed up for the part and manning the lock office. Now she was in casuals, looking forward to a two-week holiday.

When most people move house, they change their location to do so. For Nigel and Angharad, they relocated their new house from Port Solent and had only just moved into Brival the month before we arrived, the latest in a string of boats on which they have lived for the past three years. 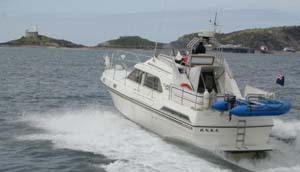 They had been kind hosts during our stay and we were pleased to spend a little longer in their company as we ran out of the harbour. Taking photographs of landscapes with nothing in the foreground is something of a thankless task; having the Turbo cutting her way across Swansea Bay made for much better images of the Mumbles. So much for the exploitation of the press.

After that we parted ways, with Brival hugging the inshore route and Missing Link running further out to run some checks on navigation gear. At first we could see the Turbo but later she dropped off the edge of the horizon, delayed (as we later discovered) by a fuel blockage.

Our run was relatively straightforward with just a couple of complications and then a real highlight.

First came the discovery that the draw under the forward berth had been left unlatched and had come crashing out, its weighty contents bending the runners in the process. Mark that one down to terminal harbouritis.

Then we were rather intrigued to get an early waypoint alarm and also to see the east/west leg on our route show up as the reciprocal course. We now have a little chore to see if we can replicate the fault. 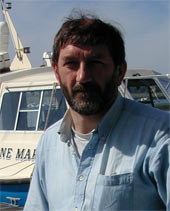 But all was forgotten when Missing Link‘s latest crewmember, Ken Watson, spotted at least a dozen dolphins frolicking in the waves off Saint Gowan’s Head. We nosed over to have a look and soon found ourselves marvelling at an acrobatic display both under the water and over it as the dolphins shot in to ride our bow wave or threaded a dynamic weave through the stern wash. For the dictionary definition of ‘exultation’ look no further.

As with our encounter with basking sharks off the Lizard (see Grand Tour Day 16) it would have been easy to stay much longer, but Missing Link‘s bow was finally pointed in the direction of Milford Haven. Given the lack of activity to seaward of the Castlemartin range we were able to close the coast and soon had the approach channel buoys in view. 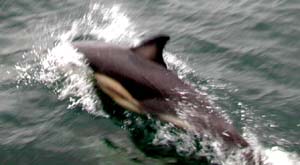 Once inside we had a run along memory lane to Neyland: Thorne Island’s hotel and restaurant for (supposedly) shipwrecked mariners, Dale’s sandy bay and waterfront pub, Stack Rock’s lonely fort, the RNLI slipway station at Angle, the still busy oil terminals and the marina in Milford’s converted dock. Finally we were on the approach to the former flying boat station at Pembroke and to Brunel’s artistry at Neyland itself. All had become familiar to us when working at the West Wales Boat Show in 1993 and then when running a trailboat rally here.

Suffice to say we’re pleased to be back and a little disappointed we cannot stay longer. More news tomorrow.