Not that it started so bright. I’m getting very used to waking up these days to the sound of rain pattering on the coachroof. Think positive; at least there ought not to be any hose pipe bans on the coast or water shortages on the inland waterways.

Despairing of finding enough sunlight to take photographs, Ken and I nevertheless set foot in the general direction of Neyland, stopping briefly at the marina’s chandlers and excellent cafe to obtain some light bulbs, an Irish courtesy flag (there’s faith for you) and a welcome cup of coffee.

Immediately outside I stopped briefly to read one of many helpful placards lining the shores of Westfield Pill. It explained how Neyland owes its existence to…yes it’s that man Brunel again. He chose the site as the basis of a new transatlantic terminus for his railway line from Paddington. Work began in the early 1850s. The existing village of Neyland was demolished and moved up the hill, becoming New Milford in the process. It was replaced with rail and port installation works, some of which are still in evidence today.

Brunel died in 1859 and his dream of a transatlantic port died with him. The new facility turned to Ireland instead, establishing a ferry run linking with the trains from London that lasted until 1906 when the service moved to Fishguard. A thriving local fishing fleet also migrated to nearby Milford Haven soon afterwards. As if to mark the end of a chapter, the declining town reverted back to the name of Neyland and eventually lost its rail service in 1964. 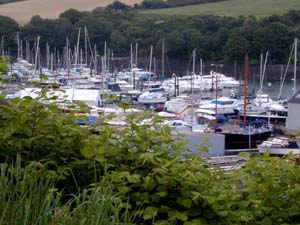 These days Brunel’s Quay is humming again at one end, thanks to the very busy activities of the Dale Sailing boatyard, and is placidly fully occupied further up the Pill with houses on the foreshore and boats packing Neyland Yacht Haven’s pontoons. Given 9nm of sheltered waters on which planing craft can do their stuff in one direction and rivers meandering through the Pembroke National Park in the other, you’ll not find a better local venue for motorboating in the UK.

Sadly we could stay no longer, having timed our run to Pwllheli so that a forecast SW F4-5 and tide would be running together.

Romping down past the various ship terminals we marvelled at the amount of room available for boating in these parts. As Ken described it, a forgotten Southampton Water. Soon we were out on the entrance, skirting the outside of the Eastern Channel and feeling the first of the swell.

If the weather had been up for it, we would have taken a much closer look at Skomer Island which, with its sister Skokholm, lies immediately outside the Haven entrance. A National Nature Reserve and home to puffins, razorbills, guillemots, kittewakes, Manx shearwaters and lesser black-backed gulls, it has a small haven with visitor buoys. However, for us it was all business and a need to press on.

A trio of sights tried to entice us. First, any number of puffins who waited till the last moment of our appoach and then dived, or took off with frantic flapping of impossibly small wings and waggling of a bright tails. Soon afterwards we saw dolphins again (see yesterday’s report), but refused to stop to play. Then the solitary splendour of South Bishop, the rock and the lighthouse, beckoned us closer but again Missing Link was not for turning.

Set up on autopilot and with the engines impressively pulling us up hill and down dale with no sign of labouring, we sat back for the long downwind legs ahead. Life was comfortable enough that I even managed to make a couple of cups of tea along the way without stopping, despite the fact that the sea was still quite lively as a leftover from higher winds overnight.

As another bonus the visibility started to lift and we caught the breathtaking sight, too subtle for a camera, of North Wales’ hills and mountains glowing in the early evening sunshine off the starboard bow. 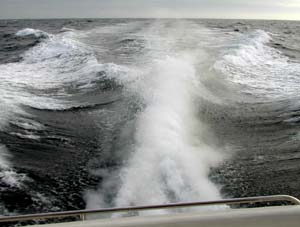 At 55nm, our run up the coast was the longest straight leg of the Grand Tour so far. The waypoint at its end was set a couple of miles off St Patrick’s Causeway, a 10nm long drying spit that would allow saints and sinners to walk on water at springs. Just as we spotted the cardinal (buoy, not holy man) marking its outermost point, I was startled by the vision of dolphins racing in towards us from each side.

This time I had no hesitation in dropping the throttles to 12kn. Instantly we had close escort for around 5min before Missing Link‘s bow was turned for Pwllheli and suddenly the dolphins were gone again as quickly as they had arrived. It’s hard to describe your feelings about such an experience; certainly no-one can replicate it for you in terms of words or pictures.

Heading up into Tremadog Bay and seeing the Llewyn Peninsula gradually enfold us, our eyes had to be re-tuned to look for fishing markers. After dodging a few, I turned Missing Link‘s bow away from another one, only to be told by Ken that the object in question was a seal! Needless to say the creature disappeared in disgust at my misidentification and so we pressed on for Pwllheli and the marina within.

As soon as we turned across the wind and felt its cold and damp touch, there was every encouragement to slap the lines on and zip the covers up. Plus there was a little matter of the European Cup Final to attend to.

When Manchester United played Juventus in the second leg of the semi-final I had started watching after they were 2-0 down; they eventually won 3-2 (see Grand Tour Day 5).

Having secured ship, I frantically tuned the television only to discover they were 1-0 down against Bayern Munich in my absence. The rest, as they say, is history.

Old Trafford’s archives will never record that Manchester United won 2-1 in the dying seconds because Missing Link completed a faultless passage on time and her skipper was able to enter the fray as a late substitute viewer. But we know the truth…