Commentary
Al Paton apparently slept well on his first ever night aboard a motorboat, but was later heard to say the slight rocking motion was akin to the light-headed effect of a couple of pre-dinner beers. However the full joys of boating were just about to be unleashed upon him as we started removing furniture and hatches from around his saloon bed, even as he was getting out of it.

Missing Link‘s engines had hit an oil change service interval on our arrival at Pwllheli, something which I hadn’t anticipated too well. So I was particularly pleased that local Volvo Penta agent Llyn Marine had been able to squeeze in an early visit this morning, despite being on the eve of a Bank Holiday weekend. 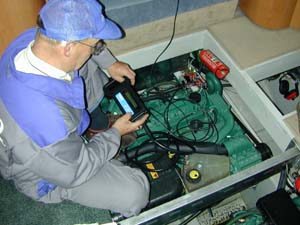 Our man in blue overalls, John Parry Jones, soon had the engines warmed, drained down and refilled, the filters changed and the compressor (supercharger) oil levels checked and topped up. But a couple of complications arose when the diesels were run up.

First we noticed a squeak at idle off the front end of the port engine which was traced to the compressor. John removed the drive belt, checked the idler wheel, declared both fine and reassembled everything. The squeak, though still apparent on the re-run, later disappeared but we’ll keep an eye on that.

Then John plugged a diagnostic meter into the computers on the 260hp KAMD44 diesels. All criteria came up fine, except an under-voltage on Missing Link‘s starboard alternator which showed 13V instead of the port unit’s 14V, the readout expressing figures in whole volts only, rounded up or down. The alternator also seemed to be running very warm.

I had noted and logged an under-voltage on the starboard gauge at the start of the Grand Tour but put it down to a voltage drop or fault on the wiring to the gauge as the drive belt was found to be fine and the batteries were charging. However, given the diagnostic readout it was deemed sensible to take the alternator off and have it checked by a local auto-electrician. His test bench threw up no obvious fault, so back on the engine it went. This time around a multimeter was placed across its terminals, giving us readings of 13.0V at idle and 13.8V at 1500rpm, still down but with no immediately obvious reason.

With John setting off to do a pre-weekend outdrive rebuild I took a look at the only other obvious culprit, the batteries. Disconnecting the three domestics and two engine start batteries from circuit, and from each other, I got normal voltage readings on all of them, just over 12V on the well-used domestics and a healthy 13V on the engine units. Speaking on the telephone to my crew for next week, MBM’s electrical guru Malcolm Threadgould, he didn’t seem too worried by what we had found but promised to bring his discharge tester with him, just to make sure.

And so are the ways that days pass you by.

Al had escaped early for advertising pastures new but the rest of Missing Link‘s crew had spent most of the day dodging round open engine hatches and needed to escape also. Given the fact that we had a car available for explorations, I had in mind an evening foray to the strange village of Portmeiron just a few miles away and buried in the southern shore of Snowdonia.

Created by Welsh architect Clough Williams-Ellis, developed over nearly half a century from 1926 and made famous by the cult 1960s television series The Prisoner (“I am a name, not a number”), I somewhat naively thought Portmeiron would be a fun location for dinner. But all we found were locked gates and a security guard, and enjoyed no view of colourful buildings, domes, spires and quays punctuating the wooded landscape. The whole place had closed hours before at 1730 as is its daily habit; perhaps they have to keep the prisoners in?

So we turned tail and drove back the short distance along the 5p return toll road to the harbour town of Porthmadog, parking near the Ffestiniog narrow gauge steam railway station and finding the excellent Yr Hen Fecws (bakehouse) bistro and coffee house in Lombard Street. Great service and great food, although it is unlicensed, so wine drinkers need to take their own bottle with them, for which they pay a modest corkage of ??1.50.