Commentary
What a way to celebrate your birthday and wedding anniversary!

If the schedule hadn’t called us to order, I would certainly have stayed in bed this morning. Such a decision would not have displeased my parents, hardened yachties though they may be. And it would have been met with a thumbs-up by my wife Michelle, who had to rouse herself to make passage to Port Dinorwic in the car in which they had all travelled to join me in Pwllheli two days before.

Instead two generations of Hollambys found themselves nosing out of into the kind of monochrome images that are painted when the clouds are low and the rain is propelled by a cold north easterly. Skies in 64 shades of grey, seas to match but flecked in white and the black smudges of mountains beyond were our lot as we made our way out of the harbour entrance.

At my urging Dad had spent some time the day before laying a tourist track to take in the sights. His pencil line on the chart ran inside St Tudwal’s Islands so that we could see Abersoch from seaward. It then stayed in touch with the headlands at the end of the Llewyn Peninsula, with an alternative track forking off south of Bardsey Island if the weather and tide didn’t allow us to run through the infamous sound between it and the mainland.

Now we were pleased we had viewed all of these sights by road the night before (see yesterday’s report). For we only got the faintest impressions of each through increasingly dogged showers that smudged out all the detail of the nearest lumps of rock and obliterated the furthermost ones altogether. At least our zig-zag trail enabled us to confirm visually what plotter and radar were showing. And staying snug under the lee of the Llewyn Peninsula’s southern fringe enabled us to crack on at as much as 27 knots until reaching the thankfully placid westbound rip tides of Bardsey Sound. Mindful of the words of one pilot which encouragingly described the 1.7nm wide passage as “hell itself” when a F8 blows against the current, we respectfully dropped the throttles a touch, but got no impression of the kind of seas which had claimed many ships over the centuries.

As anticipated, it was when we turned the corner and headed north eastwards that our progress was slowed. Now we had wind against tide and, although giving the overfalls off The Tripods a healthy offing, there were a few rogue waves about which soon saw us backing off progressively to 13 knots. One came out of nowhere and launched Missing Link on a moonshot, the first time her props had bitten air on our journeyings. One of my birthday presents is a trial flying lesson but I had originally thought I would climb into something with wings before exercising the option.

Fortunately Anglesey soon started to give us some lee and the waves subsided to a level where we could tab Missing Link‘s nose into them and crack along at 18 knots or so without discomfort.

Our only other slight adventure came on the approach to the Menai Strait, where it became apparent that the note on our 1999 edition Admiralty Small Craft chart 1464 was spot on:

“Depths in the entrances to the Menai Strait are continually changing. The buoys are moved accordingly.”

The buoys certainly had been moving since the Admiralty last surveyed the area in 1980; we found the approach pair C1 & C2 well over to the east by about 0.5nm or so. Fortunately they were easy to spot and their presence was also signalled early by a sudden flurry of outward bound yachts mostly running on foresails only, genoas straining in the healthy north easterly which, if anything, had picked up a notch on our approach.

After that the navigation was a straightforward case of buoy-hopping, depth sounder watching and following a compass course when the Mussel Bank port hand mark, guarding an evil looking little obstruction of the same name, failed to materialise. We were close to the top of the tide but it seemed prudent to stay in the deep water, even if we had to slow right down from time to time to give yachts a chance with our wash.

Soon we were through the twin gateposts of Fort Belan to starboard and Abermenai Point to port, their attendant sand dunes providing the first splash of colour on our route. Then our attention was diverted by a VHF call from Foxy Sam. Owner Chris Ross and his family had left their Port Dinorwic mooring to meet us off the splendid facade of Caernarfon and its proud castle. 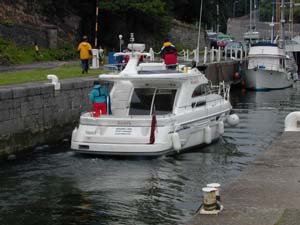 Chris has been a regular e-mail correspondent of the past few weeks, encouraging me to visit Port Dinorwic and sending lots of good advice. We were more than happy to run in company with his Aqua-Star 38 along the green banks of the Menai Strait back to her home base where the lock was conveniently on free-flow and a berth had been left vacant for us on the wall right by the entrance.

With lines made fast we immediately fell in love with the intimate calm of the former slate port which winds its narrow way back towards a wooded hill. Michelle was already there, having enjoyed a splendid though equally rainy drive through Snowdonia, and soon had the car parked right alongside us on the quay, ready for our explorations of Anglesey later in the day.