Commentary
We’d taken a look at the Swellies, the rocky stretch of Menai Strait that runs between the Britannia and Menai bridges, the night before on the way back from a drive around Anglesey. At low tide the jagged outcrops and disturbed waters looked every bit as menacing as the chart suggested.

However, we’re not averse to cheating on the Grand Tour and when Chris Ross, owner of the Port Dinorwic-based Aqua-Bell 38 Foxy Sam, suggested acting as our pilot for the trip through the Swellies and around to Conwy, our answer was always going to be in the affirmative. 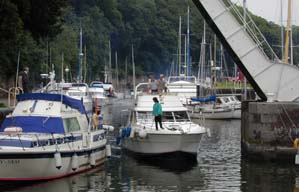 First though I wanted to take an hour out to stroll around the basin of the 19th Century dock, now grade II listed, that used to be connected with the nearby Dinorwic slate quarries via narrow gauge railway. At first glance little has changed, save for the fact that it is leisure craft rather than working coasters that lie against the walls, warps secured to suitably beefy bollards. However look more closely and you can see shorepower hook-ups, water points and a nearby toilet block amongst the more recent additions.

Given its snug location buried deep in a hillside, it’s hard to imagine a weather condition that would greatly trouble the incumbents. But once you look further you still find enough space for a sizeable yard ashore, while diesel is served from outside the lock. 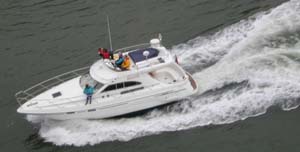 Recently under new management Port Dinorwic, like so many of our stops so far, has an upbeat and close to capacity feel to it, even without the frills and trappings of a modern marina. Locking through could get quite exciting if anyone got agitated, but the boats we saw making their way in and out seemed very much on the pace and atmosphere of the place – gently, gently with no particular stress. A lifting bridge bisecting the dock goes about its business in similar fashion, albeit with a bit more of an audible groan.

Being the seaward side of the bridge and having killed enough time taking photographs so that the lock was on freeflow, our exit was easy and soon Chris was guiding us along the right path. We could have cracked along as fast as we had liked until the Menai Bridge, but chose instead to chug along off the plane in order to take in the sights, including a rather stunted Nelson’s column to port.

Soon we were upon the Swellies themselves; although they looked rather less fearsome with a decent level of water across them, the factor making our passage particularly easy was Chris’s calm instructions, pointing out the turning points and transits. Once again we were able to prove the benefit of a little local knowledge in sorting out what was, in the event, a pretty straightforward bit of pilotage. Missing Link‘s head started to wander quite a bit in the turbulence cast out by Platters Rock, keeping Dad busy at the helm, but there was plenty of time to look at Thomas Telford’s masterpiece, the 1826-built Menai Bridge, ahead. We could also see my wife Michelle, and Missing Link‘s new crew Malcolm Threadgould, stationed on the suspended span above to get the aerial view as we passed below. 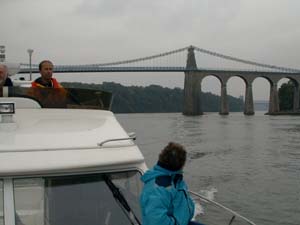 After that we stuck to the new 8kn summer speed limit, almost the only motorboat to do so, right down to Beaumaris, taking in the sight of Bangor to starboard and the proposed sight of a new marina at Gallows Point to port. Picking our way through a succession of yachts, we finally found a big enough hole to open Missing Link right up to 30 knots.

In no time we rounded the lighthouse off Trwyn du which is helpfully marked ‘no passage to landward’ and set our curved course around Puffin Island before setting a direct track for the approach buoys to Conwy. Hanging well off to one side to keep clear of a steady procession of yachts and motorboats making their way across a mirror-calm Conwy Bay, Missing Link soon closed down the safe water mark, dropped off the plane and joined the conga around the approach channel and up the river to the marina.

We were soon settled in our berth on pontoon C and chatting with quite a greeting party of local owners. Then it was time to think about a late lunch with my wife and parents before waving goodbye to them when a dull whumph could be heard and felt. A Coronet sportsboat called Zeta had just exploded after tanking up on the fuel berth. Michelle returned to Missing Link a little shocked at having seen the incident at close hand, the children and adults aboard having got off okay but with obvious signs of burns. 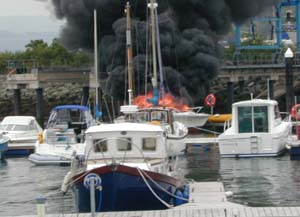 Once they arrived it took the fire brigade quite a few minutes to deal with the by now deeply seated blaze, but the Coronet thankfully didn’t ignite anything else and she was finally hoisted ashore, a blackened twisted mess inside. At time of writing it seems that the boat was not fitted with bilge blowers and exploded after the engines were throttled up as she was leaving the berth. Fortunately we understand that no-one was seriously hurt, although the children were detained in hospital overnight.

One thing was for certain; the busy Bank Holiday hum of Conwy Marina died instantly, to be replaced with berth-holders walking up and down the pontoons in hushed tones. The lessons in the need for fire safety had been all too obvious…