Edward I’s great castle has stood tall at the mouth of the River Conwy since 1283; its medieval battlements and drum towers still remarkably preserved. The same can mostly be said about the town wall’s general health. 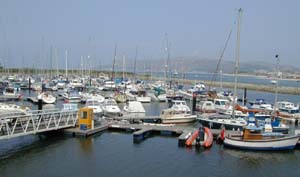 Jumping forward another century takes us neatly on to the subject of Conwy Marina, a 25min walk downstream from town. Like many such places it started life as a hole in the ground. But in this case it was a particularly deep one carved out by excavator in which sections for the new A55 road tunnel under the river were fabricated. Now it is a modern 24hr facility providing a home for 420 boats.

There’s nearly everything you would expect to find in such a place, including a pub named after the remarkable World War II Mulberry Harbour which was constructed where the marina stands today and then towed many hundreds of miles to be used in the 1944 Normandy D-Day landings. Another bonus is a first class view of the magnificent Great Ormes Head towering above the other side of the estuary. Judging from our half term visit, the marina is a great place for family boating, with as many miles being done on attendant tenders and personal watercraft as on the motherships themselves perhaps.

The only missing element is a food shop. Malcolm’s off-site recommendation: IG Edward’s delicatessen, an emporium of everything that’s good to eat, situated on Conwy High Street.

If only our passage to Liverpool could have been so desirable. Today dawned with a blanket of cloud that soon started to dump an increasing quantity of its contents in our general direction. It was bad enough when fuelling up that we had to make an impromptu dam of cloths to stop a river of deck water sloshing straight down the filler pipes. But the real effects of the rain were to be felt once we cleared the channel out of Conwy.

Although the wind was, in essence, probably no more than its forecast NE F4, the rain storms which painted black traces on the radar all around us were certainly adding their own gusts from all directions, making for an impossibly confused sea.

Former Shoreham lifeboatman Malcolm had spotted a packet of Swan Vesta matches onboard Missing Link earlier in the day and immediately related how it was considered bad luck by many salt blood coxswains to carry them on a boat. Now he was taking his spell at the helm, teasing the throttles up and down as we alternately faced steep walls of curling water, then found the gaps in-between. More than once we both mused about casting our Jonah box of matches over the side to see if it would calm troubled waters, but didn’t do it. For starters, that would involve opening a window which, given the rain and spray running, didn’t seem wise in our shirt-sleeve inner helm environment.

Missing Link took it all in her stride, although we somewhat alarmingly developed a drip from the corner of the main electrical control panel when some big water hit the flybridge apron. Our lazarette seal has also started to fail, so the rear bilge pump kicked into life occasionally with little bursts in response to the quantities of water landing in the cockpit. Both jobs are now on our priority list.

Ever so gradually we made our way across Liverpool Bay, keeping a keen eye on the clock as we had a lock time to make. Unlike sailing or displacement motor cruising, where once you get off the pace you’ve had it, we at least knew we might make up the miles once we got more favourable conditions. These eventually arrived about two-thirds of the way across, although we still had to peer intently through the streaming windscreen for the occasional mean wave that, if taken at high speed, could stuff us and do real damage.

Finally we gained the long 11nm approach to the Mersey, the channel’s curve from east to south marked by large buoys to starboard and light floats to port. Despite their frequent spacing, it was impossible to see much more than the next mark ahead except on the radar. And then as we entered the river proper, a particularly thick rain squall took out both banks altogether, robbing us of our hoped-for view of the fascinating waterfront either side.

We finally reached Brunswick Lock with 5min to spare on the latest entry time advised by Liverpool Marina in a telephone conversation the day before. Stood on the pontoon riser was a very wet man waiting to greet our arrival. He directed us to our berth right below the clubhouse and office complex where another soaked man stood as a welcoming beacon in the heaviest spell of rain yet, patiently waiting to take our lines whilst I flicked enough water out of my eyes to back Missing Link in.

A big sign above us declared ‘Welcome to Harbourside Club’. Thinking of the hot showers and cosy bar within we zipped up the boat as best we could and said a big thank you for that.