Great excitement this morning as two of the biggest parcels yet to arrive from the office turned up at the transom door. As much as I am enjoying the many privileges that the roller coaster of the Grand Tour bestows it is nice to have reminders of a more normal life, however oblique. Buried deep with the latest batch was a card from our former Assistant Ad Manager Michelle Simpson and her husband Tony with pictures of their bonny baby Georgia, born just before I left and now already four-months-old. 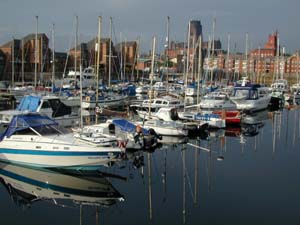 It’s typical of the service we have received since arriving here at Liverpool Marina that someone should risk a hernia and stagger down the walkway with our crates. Thanks to our friendly stevedore we now have Grand Tour hats onboard and a fresh supply of magazines. It’s a bit of a balancing act, trying not to completely overflow Missing Link‘s lockers on the one hand and not running out of ‘essential’ materials on the other. Emerging triumphant from some distant corner of a stuffed lazarette after persuading yet one more item in, I sometimes wonder how our Sealine gets up on the plane.

Domestic chores and a serious paperwork session complete, I set about keeping my promise to Malcolm that we’d get serious about seeing something of Liverpool this afternoon.

First we retraced our steps of the evening before, walking the mile or so along a ruler straight restored Mersey embankment to the Albert Dock.

We had taken an excellent dinner at the Est Est Est restaurant last night, choosing it on the basis that it had the happiest looking incumbents of any viewed in this restored complex of warehouses. But when walking back there were as many security guards on view as night-time strollers.

Today was a different matter. The Beetles sang an everlasting version of ‘Yellow Submarine’ as we passed by the museum dedicated to them (it must be a little spooky to still be alive and have a museum to your name) but we were aiming for the Albert Dock’s covered walkways beyond. There we were suddenly confronted by bundles of families on half term holidays, browsing and buying their way underneath the distinctive arched brick ceilings or fuelling up at a range of cafes running from simple to sophisticated.

We chose simple for a late lunch consisting of a pasty apiece and a shared mountain of a bun called a scone, scone-like in texture but shot through with currents and heaped up like a Snowdonian mountain. 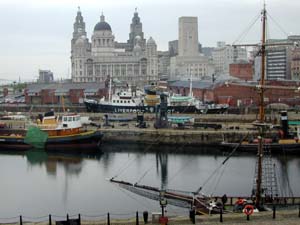 Suitably fortified we then forged our way through the crowds to Canning Half Tide Dock and the Merseyside Maritime Museum’s main entrance and range of subsidiary displays. Paying Ł7.95 for two entry passes and a guidebook, I was somewhat surprised to discover that this qualified us not only for the day, but also for annual season tickets to the eight facilities falling under the ‘National Museums & Galleries on Merseyside’ banner. These include the Liverpool Museum and the Museum of Liverpool Life, so we shouldn’t be short of things to do if the weather keeps us in port.

Not that we managed to cover the Maritime Museum’s many facets in the relatively short time available before closing. Different galleries are focused on aspects of Liverpool’s seafaring history: emigration to the New World, the slave trade, local navigation issues and the World War II Battle of the Atlantic; there’s no attempt to romanticise and most displays carry a poignant message. A stunning gallery of ship models, many of which must have taken longer to build than their full-size counterparts, fascinated us.

The museum also provides a great view across the museum’s ships and tugs lying in Canning Half-Tide Dock and the dry docks beyond to a trio of Liverpool trademarks, the 1910 Royal Liver building, the former Cunard headquarters and the Edwardian Mersey Docks and Harbour Board building. Looking round you can also spy the red and white stripes of the White Star Line’s 1898-built headquarters. Ignore the modern buses and cars, untidy in your mind the tidied boulevards. Then dream just a bit harder and you get a glimpse of what the docks would have looked like in their heyday, transatlantic liners and an attendant flurry of lighters and tugs busying the Mersey outside where once was placed the largest floating pontoon in the world.

Once closing time arrived, Malcolm and I decided to make a bit more of the day, pausing briefly to look at the propeller which would have been turning three times a second on the end of one of Lusitania’s shafts when the liner was torpedoed in 1915. It rested with the ship until recovered in 1982 and was then purchased by the museum seven years later.

From there we walked up to find the Liverpool’s main shopping drag, procuring some essential supplies in the process, before walking uphill to the Anglican example of Liverpool’s two cathedrals. Up close its muscular 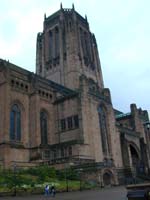 walls are no more pretty than the views it casts out for miles around; an awesome if somewhat brutal statement of faith. Perhaps the inside is different but our arrival was just minutes after gates and doors closed for the day, so we set off for the marina again, inadvertently tripping over Liverpool’s Chinese quarter on the way.

After walking through the semi-dereliction of the light industrial warehouses which lie a way back from Liverpool’s now pristine waterfront, the ordered marina and its secure surroundings struck a new contrast. We were planning to go up and eat at the Club this evening, but a welcome ray of warm evening sun, coupled with weary legs, kept us aboard Missing Link whilst we mulled over what to do about a synoptic chart with far too many lines on it for comfort.