I was sat in my cabin early this morning reading how we might expect a SW Force 3-4 for at least the first half of the day when a 35kn westerly squall burst through porthole and soaked everything in its path, me included.

At least that quickly made my mind up about taking Missing Link‘s unscheduled day this week in Liverpool. If we couldn’t view the waterfront on our own boat, it seemed there was nothing for it but to take another means.

Captain James Vass has served the whole of his seafaring life on the renowned ferries that ply between Liverpool on the east bank and Wallasey and Birkenhead on the west. When he hit his 25th year on the run, he calculated he had sailed the equivalent of twice around the World. That was five years ago and now he is well on with his third circumnavigation.

Longevity seems to be a bit of a trademark on Mersey Ferries, for the ship on which we met Captain Vass is 40 this coming October. Woodchurch was one of a pair of purpose-designed proper little vessels built by Philip & Son of Dartmouth for the then separate Birkenhead to Liverpool run. Measuring 152ft (47m) long with a beam of 40ft (12.3m) and draft of (2.46m) 8ft, she is powered by a pair of original Crossley Bros 8-cyl diesels which drive widely spaced conventional screws, each with its own rudder.

The Crossleys were once good for 700bhp apiece, but have been downrated twice in deference to their age. They originally answered to an engineer’s hand following Captain’s orders, but are now directly linked to the bridge telegraphs. And spares are becoming more than a bit of a problem, but still they keep thumping away, giving a cruising speed of 10-12kn.

Control of the Woodchurch is remarkably similar to twin inboard motorboat handling, although it is definitely a two-man job. During our bridge visit Captain Vass handled the telegraphs whilst Mate John Kelly, a three-ringer now after joining as a deckhand 15 years ago, was at the helm.

Mersey currents run as much as 7kn and they are used to good effect when arriving and departing.

On the approach Woodchurch‘s bow is pointed at a striking angle towards the pier, the tide working her in, before the outside engine is put full astern, confirmation of the fact coming as the wooden decks shudder, the funnel belches black and the 464 tonner neatly swings alongside to kiss the tyre fendering. It looks easy, but it would be a fool who didn’t recognise the skill required in timing commands and reading the Mersey’s changeable moods. 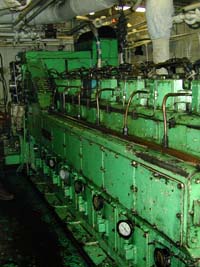 While alongside the ferry is held against a spring. Then the gangway is rattled aboard – Captain Vass says that homesick ex-pat Scousers travel back from as far away as the USA just to hear that sound. Disembarkation and embarkation complete and with numbers tallied on the ship’s log, Captain and Mate manoeuvre the Woodchurch’s bow out into the current and roll her helpfully curved stern off the tyres before heading for the next stop.

Once there were many ferries plying their trade across the river carrying tens of thousands to and from their work in the packed docks on either side. Now there are just three, only one of which is employed at any one time on a triangular run on an earily quiet Mersey. Once the Woodchurch and her like landed on the half-mile floating stage off Liverpool and had to squeeze their way in between Isle of Man Packets and Irish steamers with transatlantic liners nearby for company. Now she has much of the truncated 1970s-built pier to herself.

Times they are a changing. The 50min cruise/ferry service which operates between morning and evening peak periods (adding a brief foray upstream of Birkenhead), the regular information announcements and the strains of Gerry Marsden singing Ferry Cross The Mersey on arrival back under the shadow of the Royal Liver Building all indicate that many of the 3000-4000 daily passengers today are tourists.

But who cares. For as long as the Woodchurch‘s polished brass, her porcelain studded electrical boards, slick engineroom plates, lazy Crossleys and planks around which millions have strolled remain, one will always be able to appreciate past values and hold some hope for the future.

Note since this story was written Woodchurch underwent an extensive refit in 2004 and was renamed Snowdrop. She was re-engined and re-funnelled at that time and over 90% of her steelwork was reportedly replaced. Wikipedia entry for mv Snowdrop.