Commentary
The weather has been all over the show in the past few days.

We spent so long in the city yesterday that we failed to arrive back in time to fuel Missing Link. It was something we instantly regretted when we saw the forecast last night. This suggested we should have taken up Liverpool Marina’s offer of an 0500 lock this morning, rather than wait for the afternoon tide, given that winds were due to build all day and bring with them another batch of squally showers. But we only had half tanks, marginal for the 85nm or so to Whitehaven.

It made it worse this morning when we awoke to find brilliant sunshine and little wind, then worse again when a little flurry of rain hit just as we were stripping off covers to go for diesel. On the bonus side Malcolm and I were tired from yesterday’s explorations and probably needed the sleep, rather than staying up half the night to get Missing Link ready and then getting up in the other half to go.

We needn’t have spent a couple of hours last night mulling over a limited range of alternatives though. The sun burst through again to burn the dampness off Missing Link‘s decks and we were left with blue skies and the promise of calm seas. It was a good a send off as Liverpool Marina could have organised. We’ve enjoyed the comfortable surroundings here, its location within walking distance of the City and the friendly assistance of the staff, typified by Ronnie’s cheery wave from the lock control room towering above us as we squared Missing Link away for the Mersey beyond.

I pushed the throttles forward as soon as we reached the main channel, for we had a target of arriving at Whitehaven no later than HW+3, around 1900, in order to cross the outer harbour to the lock with a bit of water in hand. So the fascinating Mersey waterfront was soon passing us by; we could have lingered much longer to look at it. Chasing up the stern of the Woodchurch (see Grand Tour Day 49) and then giving her a wide berth as she turned for Seacombe Pier, we said our melancholy goodbyes, having grown somewhat attached to the area during our short visit.

Counting off the port-hand light floats and watching a flurry of commercial ships race up on the tide, I tried to imagine what it must have been like to sail off on a World War II Atlantic convoy, wondering if one would ever see these welcoming gateposts again. But I failed; our full colour surroundings and relatively flippant reason for heading out didn’t match the monochrome scratched films and serious intent of the people in them that I had seen in the Maritime Museum two days before.

On our entry to Liverpool we’d barely been able to see one navigation mark ahead. As we cleared the channel outward bound it was a different matter, the towers and box-like structures of oil and gas rigs marking the horizon at numerous intervals. We’d laid a track to take us between the Hamilton and Lennox fields and then up to run northwards just off the large exclusion zone by the South Morecambe gas field. In the excellent visibility this not only gave us a perfect view of the gangly platforms and their attendant ships, but also of the distant shore and Cumbrian mountains beyond, the nearest ones green, the furthermost black shadows.

Watching the horizon carefully for signs of developing weather, we saw a huge thunderhead gradually form into a classic anvil whilst it tracked safely inland of us and the signs of what might well have been a rainy day in the Lake District. But there was nothing more than the cool draft of our self-made breeze over the deck to trouble us and so Missing Link‘s engines were left to purr at 3500rpm giving 27kn indicated and the miles ticked off quickly.

Further up the coast either the huge Sellafield nuclear plant, or a forest of aerials on a hill nearby, gave our radar a hard time, creating a massive target with sidelobes on the open sea ahead. Then the interference faded almost as quickly as it arrived and we were left to contemplate the last few miles around the deep red hues of the cliffs at Saint Bees Head and the emerging coastline of the Solway Firth beyond. 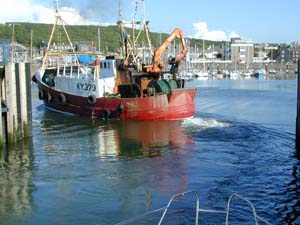 Reader Derek Morris had e-mailed us suggesting that we visit the new marina and locked basin at Whitehaven. But nothing prepared us for what we found when entering the former coal and phosphate port.

We’d called the lock office earlier in the day and they’d advised us to approach towards the north wall of the outer harbour, avoiding a shoaling patch of rocks off the south wall. As a bright red trawler entered the very traditional looking entrance immediately ahead of us, the path was made clear, but it took a couple of blinks of the eye to focus on where we were going next, an ultra-modern Ł8m lock, commissioned as recently as October last year. 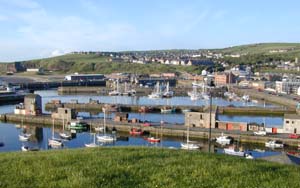 Soon we were through and lining up for our allocated pontoon berth, a friendly group of readers already poised to catch our lines. Within minutes of friendly chat in a warm evening sun we established that quite astonishing things are happening here thanks to redevelopment grants. A stroll around the large dock basins provided the first clues of resurrection from the days of devastation when the local colliery, its mines extending 5nm seaward, shut down and the commercial vessels stopped calling.

The sun didn’t completely fade until 2300 tonight; neither has it set on the Cumbrian town of Whitehaven, that much we already know.