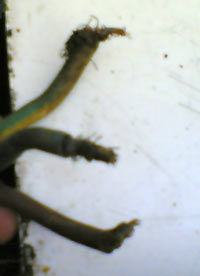 Formanda‘s HFL Marriner 2 generator has never been quite right since we took ownership midway through last year. A tendency to overheat when running close to its 8kW output has given way to a tendency simply to overheat, and to eat its coolant. Not good.

Having exhausted the usual checks such as impeller, intake pipework and heat exchanger we are at the point where more serious conclusions are being reached, such as head gasket.

Not that it was the only issue. The main output cabling had been lead to a domestic style metal cased breaker in the lazarette, through sharp rusting holes with no glad or grommet. Pulling that little lot apart last weekend I found cables so corroded, made off in a way that can never have been that good, that perhaps some of the load was simply being created through resistance. The slightly fuzzy phone pic here hints at the state of the cores.

So weather tight breaker box and a new length of cable are on a growing list of things to buy before our next visit.