The first motorboat that Michelle and I owned was a new-built Pedro 30 steel displacement aft cabin cruiser called Andantino. She was a younger sister ship to the Pedro 30 Andante operated by Dover Sea School. Andantino was fitted with a single Volvo Penta TMD31 100hp diesel as opposed to Andante's 62hp MD31; hence the appropriateness of her name.

In two years of ownership we logged over 800 engine hours and 5000 miles around Britain's coast and rivers, from Plymouth to Lowestoft. When we sold Andantino at the end of 1992 she became Miss Louise and was firstly based in the West Country and, when we last heard, then up on the Thames.

Our steel displacement Pedro 33 Solano Incalzando was a direct replacement for Andantino and we took delivery in the early days of 1993. Unlike the 30 we had a major hand in the 33's interior layout but as with her predecessor we did much of the detailed final equipment fit-out ourselves including heating, 240V circuits and electronics.

Incalzando arrived just as I was getting busier and busier with Motor Boats Monthly-related activity including Try A Boat events, cruises in company, safety demonstrations and equipment tests, plus evening staff hotel and entertainment venue at many events. No surprise really that, by the time we sold her in 1998, she had completed over 1600 logged engine hours on her twin TMD 31 Volvo Penta diesels and over 10,000 sea miles. We had travelled everywhere from the north of Holland, up the East Coast to the Humber and Trent, along the Seine to Paris, across to the Channel Islands and down to the West Country. She even managed to make a completely bizarre couple of trips, via low-loader, to the Lakeside Shopping Centre lake in Kent.

After we sold Incalzando she became Danny B and embarked on a long trip to the Med and back. Sad to relate, we later saw her at Shepperton Marina in 2006 and she was in an extremely unkept condition. Hopefully she has now find a more caring owner. 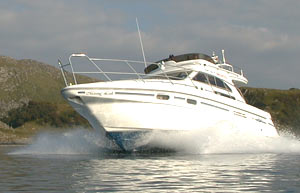 This section covers the circumnavigation of the UK that I undertook for Motor Boats Monthly with the company's Sealine F36 motorboat Missing Link. This section is work in progress; I am reinstating the daily news items that I filed in 1999 over the next few months without realising it I was blogging but the term was unknown in those days.

Missing Link completed a two-year tour for Motor Boats Monthly in 1998-1999 and I logged over 800 engine miles and 7000 miles on her over that period. 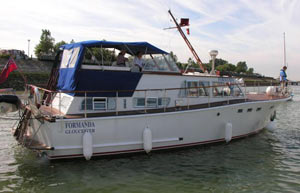 This section covers our ownership of Formanda, a Beecham Searider 45 built in 1974 at Tewskebury, Gloucestershire. We purchased her in 2006, the third owner in the boat's history.